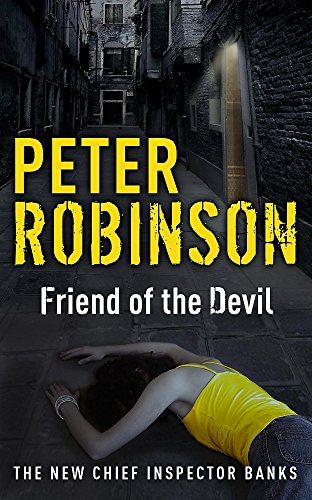 Friend of the Devil
by Peter Robinson

DCI Banks encounters a chilling character from his past in the 17th novel in the series - a number one bestseller and the basis for the ITV1 TV series.

Friend of the Devil Summary

Friend of the Devil Reviews

Watch for those twists - they'll get you every time * Ian Rankin *
Robinson once again puts his skills to work in a police procedural that grips like pliers * Independent on Sunday *
Classic Robinson: a labyrinthine plot merged with deft characterisation * Observer *
Peter Robinson is good at producing ingenious mysteries, and this one does not disappoint * Daily Telegraph *
Praise for PIECE OF MY HEART * : *
Readers will be on the edge of their seats * Publishers Weekly *
"The 17th Chief Inspector Banks outing is classic Robinson: a labyrinthine plot merged with deft characterisation." * Peter Guttridge, Observer *
'Brilliantly evokes the time of British psychedelia ... as well as being a terrific contemporary crime novel.' * Independent on Sunday *
'Peter Robinson has for too long, and unfairly, been in the shadow of Ian Rankin; perhaps PIECE OF MY HEART, the latest in the Chief Inspector Banks series, will give him the status he deserves, near, perhaps even at the top of, the British crime writers' league . . . PIECE OF MY HEART brilliantly interweaves past and present, providing two strands of tension for the price of one, and further enhancing Alan Banks's reputation as one of crime fiction's most appealing cops.' * Marcel Berlins, The Times *
'Two riveting, equally interesting crime novels in one' * Telegraph *

GOR000364167
Friend of the Devil: DCI Banks 17 by Peter Robinson
Peter Robinson
Used - Very Good
Paperback
Hodder & Stoughton
2007-01-01
528
0340836911
9780340836910
N/A
Book picture is for illustrative purposes only, actual binding, cover or edition may vary.
This is a used book - there is no escaping the fact it has been read by someone else and it will show signs of wear and previous use. Overall we expect it to be in very good condition, but if you are not entirely satisfied please get in touch with us.