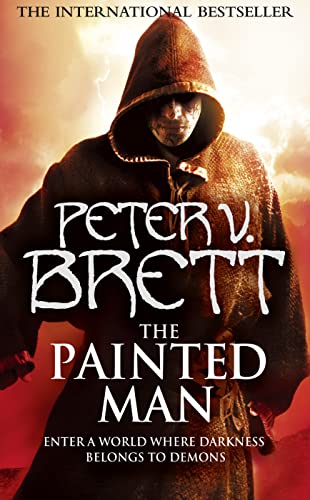 The stunning debut fantasy novel from author Peter V. Brett.
The Painted Man, book one of the Demon Cycle, is a captivating and thrilling fantasy adventure, pulling the reader into a world of demons, darkness and heroes.

The stunning debut fantasy novel from author Peter V. Brett.
The Painted Man, book one of the Demon Cycle, is a captivating and thrilling fantasy adventure, pulling the reader into a world of demons, darkness and heroes.

Arlen lives with his parents on their small farmstead, half a day's ride from the isolated hamlet of Tibbet's Brook. As dusk falls each evening, a mist rises from the ground promising death to any foolish enough to brave the coming darkness. For hungry demons materialize from the vapours to feed, and as the shadows lengthen, all of humanity is forced to take shelter behind magical wards and pray that their protection holds until the dawn.

But when Arlen's world is shattered by the demon plague, he realizes that it is fear, rather than the monsters, which truly cripples humanity. Only by conquering their own terror can they ever hope to defeat the demons. Now Arlen must risk leaving the safety of his wards to discover a different path, and offer humanity a last, fleeting chance of survival.

Voted one of the top ten fantasy novels of 2008 by amazon.co.uk.

GOR001541156
The Painted Man (The Demon Cycle, Book 1) by Peter V. Brett
Peter V. Brett
The Demon Cycle
Used - Very Good
Paperback
HarperCollins Publishers
2009-04-02
560
0007276141
9780007276141
N/A
Book picture is for illustrative purposes only, actual binding, cover or edition may vary.
This is a used book - there is no escaping the fact it has been read by someone else and it will show signs of wear and previous use. Overall we expect it to be in very good condition, but if you are not entirely satisfied please get in touch with us.