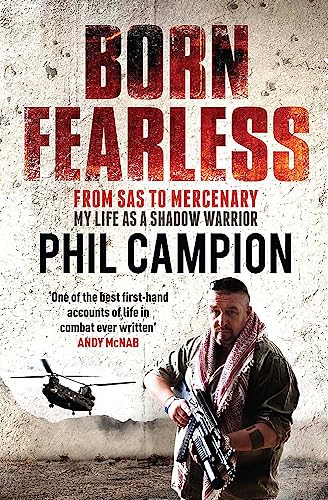 In Stock
3,99 £
The explosive true story of a gun for hire.
Like New Very Good Good Well Read
Only 1 left

Born Fearless: From Kids' Home to SAS to Pirate Hunter - My Life as a Shadow Warrior by Phil Campion

The explosive true story of a gun for hire

'Hard eyes stare out of massive beards, their faces marked by the scars of battle. With these guys their webbing looks like it belongs to them, rather than it's been hung on a pair of reluctant shoulders. There's not a word been said to us, but the ante has clearly been upped. There's a dark and sinister feeling in the air.

It doesn't take a genius to figure it's about to kick off.'

Former SAS soldier Big Phil Campion tells it like is in this brutally honest account of his insanely dangerous life as a private military operator. From playing chicken with a suicide bomber in backstreet Kabul, to taking on pirates with his bare hands, this is true-life action-packed drama at its best.

'One of the best first-hand accounts of life in combat ever written' Andy McNab. * Andy McNab *
'Tells it like it is, from a veteran of countless elite military missions and insane ops on the private military circuit' David Blakeley, author of Pathfinder. * David Blakeley *
'A great book from a true hero' Ross Kemp. * Ross Kemp *
'What's the difference between the stars of The Expendables and Brit tough-nut 'Big' Phil Campion? Phil isn't pretending to be a double hard bastard - he's the REAL DEAL' Weekend Sport. * Weekend Sport *

Phil Campion is a forty-three-year-old veteran of military operations in just about every conflict-prone corner of the world, both as a soldier in the regular Armed Forces, an elite operator and as a mercenary. He continues to work as an operator on the private military circuit and lives with his partner, Wendy, and their children in Southampton.

GOR009864141
Born Fearless: From Kids' Home to SAS to Pirate Hunter - My Life as a Shadow Warrior by Phil Campion
Phil Campion
Used - Like New
Paperback
Quercus Publishing
2012-07-05
320
0857383787
9780857383785
N/A
Book picture is for illustrative purposes only, actual binding, cover or edition may vary.
This is a used book - there is no escaping the fact it has been read by someone else and it will show signs of wear and previous use. Overall we expect it to be in very good condition, but if you are not entirely satisfied please get in touch with us.