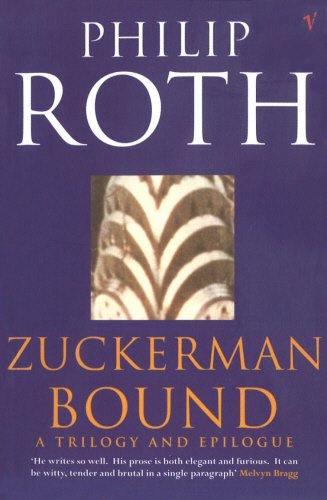 In Stock
£11.99
A novel which features the literary novelist Nathan Zuckerman. Zuckerman, dogged by personal neuroses and ill-health, has to contend with a tough television celebrity, who accuses him of plagiarising his personal life, whilst watching his father's terminal illness move towards its sad conclusion.
Very Good
Only 1 left

The comedy of neuroses, as Roth practices it, has much of the elegance of an 18th-century comedy of manners, but it also allows itself plenty of latitude. ZUCKERMAN BOUND has room for farce, when Zuckerman spends a night with an Irish film star whose steady lover is Fidel Castro; as well as for a full, accomplished treatment of a grim routine, the death of a Jewish father. But mainly it has one great comic character, the sad and threatening Alvin Pepler, ex-Marine and ex-Tv celebrity, now alleging the theft of his private hang-ups, which are on the same lines as Portnoy's, for use in the famous novel. In this chapter Dickens and Waugh live again' LONDON REVIEW OF BOOKS.

He writes so well. His prose is both elegant and furious. It can be witty, tender and brutal in a single paragraph -- Melvyn Bragg

Philip Roth was born in Newark, New Jersey on 19 March 1933. The second child of second-generation Americans, Bess and Herman Roth, Roth grew up in the largely Jewish community of Weequahic, a neighbourhood he was to return to time and again in his writing. After graduating from Weequahic High School in 1950, he attended Bucknell University, Pennsylvania and the University of Chicago, where he received a scholarship to complete his M.A. in English Literature.

In 1959, Roth published Goodbye, Columbus - a collection of stories, and a novella - for which he received the National Book Award. Ten years later, the publication of his fourth novel, Portnoy's Complaint, brought Roth both critical and commercial success, firmly securing his reputation as one of America's finest young writers. Roth was the author of thirty-one books, including those that were to follow the fortunes of Nathan Zuckerman, and a fictional narrator named Philip Roth, through which he explored and gave voice to the complexities of the American experience in the twentieth- and twenty-first centuries.

Roth's lasting contribution to literature was widely recognised throughout his lifetime, both in the US and abroad. Among other commendations he was the recipient of the Pulitzer Prize, the International Man Booker Prize, twice the winner of the National Book Critics Circle Award and the National Book Award, and presented with the National Medal of Arts and the National Humanities Medal by Presidents Clinton and Obama, respectively.

Philip Roth died on 22 May 2018 at the age of eighty-five having retired from writing six years previously.

GOR001399356
Zuckerman Bound by Philip Roth
Philip Roth
Used - Very Good
Paperback
Vintage Publishing
1998-05-28
576
0099515113
9780099515111
N/A
Book picture is for illustrative purposes only, actual binding, cover or edition may vary.
This is a used book - there is no escaping the fact it has been read by someone else and it will show signs of wear and previous use. Overall we expect it to be in very good condition, but if you are not entirely satisfied please get in touch with us.