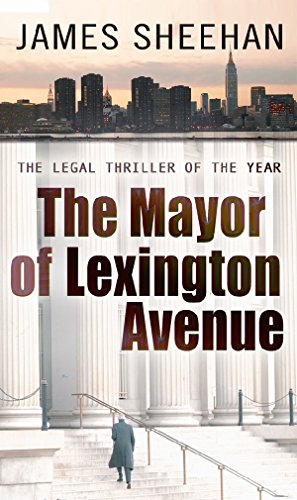 The Mayor of Lexington Avenue
by Professor James Sheehan

The Mayor of Lexington Avenue Summary

The Mayor of Lexington Avenue by Professor James Sheehan

Jack Tobin is a trial lawyer with a searing-hot reputation in Miami, far removed from his scrappy youth on the streets of New York. But when a young Florida man is railroaded into a murder conviction in the tiny Florida backwater of Bass Creek, Tobin is driven to pay back a debt to his best friend, the boy who once dubbed him 'the Mayor of Lexington Avenue'. In his efforts to get the death penalty overturned, Tobin moves back to South Florida, where he finds himself up against the small-town legal establishment, where favours are routinely traded at the expense of truth, and where police corruption has become an art form. 'If you like crime novels, legal thrillers and courtroom dramas, you'll love The Mayor of Lexington Avenue, which has all three, plus some nostalgic New York City flashbacks as an added bonus. James Sheehan, a Florida trial attorney, has created Jack Tobin, a Florida trial attorney, and one of the most interesting and complex characters I've come across in a long time. This is a debut novel, but it reads like it was written by a master of the genre.' Nelson DeMille

The Mayor of Lexington Avenue Reviews

"'Sheehan handles the courtroom stuff like a pro, dragging us through cross-examinations and procedural challenges with deftly hewn dialogue.'" * The Times *
"Sheehan has written an outstanding legal debut full of rich characters. Full marks!" * The Independent on Sunday *
"Sheehan's book is a powerful polemic against the American legal system and above all against the death penalty." * Literary Review *
"Move over John Grisham, here's an electrifying, hard-boiled thriller and courtroom drama rolled into one." * Peterborough Evening Telegraph *

James Sheehan was born and raised in New York City and grew up in a four-room railroad apartment with his five brothers and sisters. He started working at the age of twelve, shining shoes at a local shoe repair shop. At fourteen, he had a newspaper route. During school, he worked at a local delicatessen, an antique store where he stripped and delivered furniture, as a construction worked during the summers, a short-order cook throughout his college years, and as a roofer's assistant while he attended graduate school in Florida. He is currently a trial attorney in Tampa, Florida where he has practised law for many years. His experience of growing up in New York has shaped his life. The Mayor of Lexington Avenue is his first novel.

GOR000607509
The Mayor of Lexington Avenue by Professor James Sheehan
Professor James Sheehan
Used - Very Good
Paperback
Transworld Publishers Ltd
2007-01-01
592
0552154946
9780552154949
N/A
Book picture is for illustrative purposes only, actual binding, cover or edition may vary.
This is a used book - there is no escaping the fact it has been read by someone else and it will show signs of wear and previous use. Overall we expect it to be in very good condition, but if you are not entirely satisfied please get in touch with us.