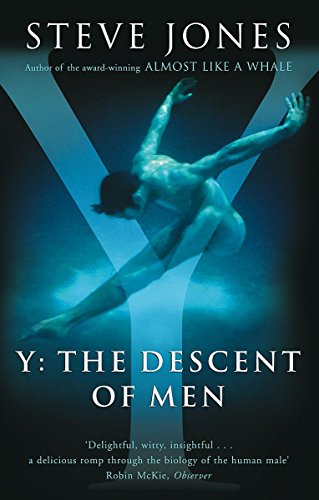 Y: The Descent Of Men
by Professor Steve Jones

In Stock
£3,99
* An objective look at masculinity - from bodies to brains, from genes to genitals.
Like New Very Good Good
Only 1 left

Y: The Descent Of Men Summary

Y: The Descent Of Men by Professor Steve Jones

Men, towards the end of the last millennium, felt a sudden tightening of the bowels with the news that the services of their sex had at last been dispensed with. Dolly the Sheep - conceived without male assistance - had arrived. Her birth reminded at least half the population of how precarious man's position may be. What is the point of being a man? For a brief and essential instant he is a donor of DNA; but outside that glorious moment his role is hard to understand.

This book is about science not society; about maleness not manhood. The condition is, in the end, a matter of biology, whatever limits that science may have in explaining the human condition. Today's advances in medicine and in genetics mean at last we understand why men exist and why they are so frequent. We understand from hormones to hydraulics how man's machinery works, why he dies so young and how his brain differs from that of the rest of mankind.

Y: The Descent Of Men Reviews

This is science communication at its best: up-to-date, authoritative, witty and packed with human interest. Not just a book for blokes: required reading, too, for every woman who wants to know her enemy * New Scientist *
A sure-fire hit * Independent *
Steve Jones's ideas drive me almost mad with wonder * Bob Geldof *
Stacked full of wonderful anecdotes and vignettes * THES *

Steve Jones is Professor of Genetics at University College, London and has worked at universities in the USA, Australia and Africa. He gave the Reith Lectures in 1991 and presented a BBC TV series on human genetics and evolution in 1996. He is a columnist for the Daily Telegraph.

GOR010592220
Y: The Descent Of Men by Professor Steve Jones
Professor Steve Jones
Used - Like New
Paperback
Little, Brown Book Group
2003-08-07
288
0349113890
9780349113890
N/A
Book picture is for illustrative purposes only, actual binding, cover or edition may vary.
This is a used book - there is no escaping the fact it has been read by someone else and it will show signs of wear and previous use. Overall we expect it to be in very good condition, but if you are not entirely satisfied please get in touch with us.