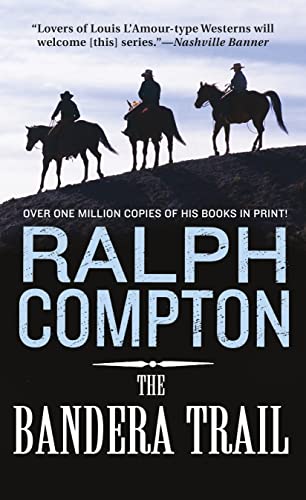 The Bandera Trail
by Ralph Compton

Used Price
£4.49
New RRP £6.99
Free Shipping in the UK
Set on rescuing their old friend, Clay Duval who is trapped inside war-torn Mexico, Gil and Van Austin cross the border after him and soon discover half of Mexico's army wants them dead.
Reviews:
Trustpilot
Very Good Good Well Read

The Bandera Trail by Ralph Compton

There were a thousand ways to die on a trail drive through Mexico. The only riches Texans had left after the Civil War were five million maverick longhorns and the brains, brawn and boldness to drive them north to where the money was. Now, Ralph Compton brings this violent and magnificent time to life in an extraordinary epic series based on the history-blazing trail drives. Set on rescuing their old friend, Clay Duval, who is trapped inside war - torn Mexico, Gil and Van Austin, nephews of Texas founder Stephen Austin, cross the border after him and soon discover half of Mexico's army want them dead. Taken prisoner by Santa Anna's soldiers, the brothers make a daring escape and head into Durango country, where they stumble on a valley full of longhorns - and a chance to build a future north of the border. All they have to do now is break Duval out of prison and drive the cattle to safety. But faced with outlaws, soldiers and the cunning plans of a beautiful woman, the Austins are finding out that this isn't a trail drive; it's a war to reach the Bandera Range alive. And the only way to do it is the Texan way - fighting for every bloody, dusty mile ahead.

"Compton offers readers a chance to hit the trail and not even end up saddle sore." --Publishers Weekly

Ralph Compton stood six-foot-eight without his boots. His first novel in the Trail Drive series, The Goodnight Trail, was a finalist for the Western Writers of America Medicine Pipe Bearer Award for best debut novel. He was also the author of the Sundown Rider series and the Border Empire series. A native of St. Clair County, Alabama, Compton worked as a musician, a radio announcer, a songwriter, and a newspaper columnist before turning to writing westerns. He died in Nashville, Tennessee, in 1998.

GOR002422937
The Bandera Trail by Ralph Compton
Ralph Compton
Trail Drive S.
Used - Very Good
Paperback
St Martin's Press
2002-08-30
359
0312951434
9780312951436
N/A
Book picture is for illustrative purposes only, actual binding, cover or edition may vary.
This is a used book - there is no escaping the fact it has been read by someone else and it will show signs of wear and previous use. Overall we expect it to be in very good condition, but if you are not entirely satisfied please get in touch with us.