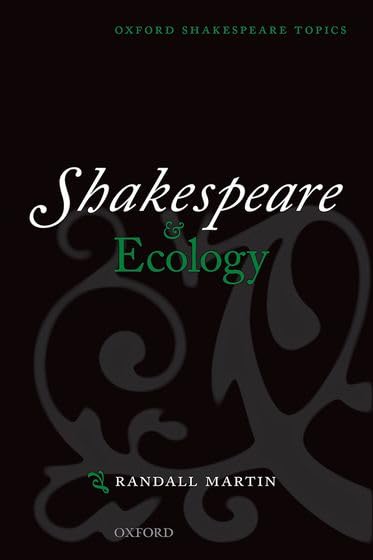 Shakespeare and Ecology
by Randall Martin (Professor of English, University of New Brunswick)

In Stock
£15.99
Shakespeare and Ecology shows how environmental problems typically associated with the nineteenth and twentieth centuries including pollution, deforestation, and climate change, actually began in Shakespeare's time and are reflected in many of his plays.
Very Good
Only 1 left

Shakespeare and Ecology by Randall Martin (Professor of English, University of New Brunswick)

Shakespeare and Ecology is the first book to explore the topical contexts that shaped the environmental knowledge and politics of Shakespeare and his audiences. Early modern England experienced unprecedented environmental challenges including climate change, population growth, resource shortfalls, and habitat destruction which anticipate today's globally magnified crises. Shakespeare wove these events into the poetic textures and embodied action of his drama, contributing to the formation of a public ecological consciousness, while opening creative pathways for re-imagining future human relationships with the natural world and non-human life. This book begins with an overview of ecological modernity across Shakespeare's work before focusing on three major environmental controversies in particular plays: deforestation in The Merry Wives of Windsor and The Tempest; profit-driven agriculture in As You Like It; and gunpowder warfare and remedial cultivation in Henry IV Parts One and Two, Henry V, and Macbeth. A fourth chapter examines the interdependency of local and global eco-relations in Cymbeline, and the final chapter explores Darwinian micro-ecologies in Hamlet and Antony and Cleopatra. An epilogue suggests that Shakespeare's greatest potential for mobilizing modern ecological ideas and practices lies in contemporary performance. Shakespeare and Ecology illuminates the historical antecedents of modern ecological knowledge and activism, and explores Shakespeare's capacity for generating imaginative and performative responses to today's environmental challenges.

Beginning with deforestation, Martin traces an environmental narrative which shows Shakespeares remarkable sensitivity to the changing consumer practices in early modern England ... Martin retains his attention on historicity, including enclosures, changing resources, sea-coal, saltpetre and wood, as well as shifting practices in land management, food production, exploitation and regeneration of the English landscape. The natural world is relentlessly animated and articulated through human responses to it, and Martins book engages with these discourses at a conceptual as well as practical level. * Charlotte Scott, Shakespeare Survey *
The work Martin has done reconstructing aspects of Renaissance deforestation, husbandry, and the relationship between militarization and the environment, among many other things, is truly impressive. His book should be consulted by anyone working on environment and ecology in the early modern period. * Kevin Curran, Studies in English Literature 1500-1900 *
The production exemplifies the ways in which contemporary performances can prompt ecological awareness. Martin's extensive research and his application of historical circumstances to Shakespeare's canon operate in tandem with his constant eye to modern transmission, which creates a book that offers incredibly valuable scholarship in its subfield. Martin's impressive knowledge of source material, modern criticism, and contemporary ecological scholarship makes this book an asset for any course aiming to show literature's capacity to educate humanity in ecological ethics, then and now. * Mark Kaethler, Sixteenth Century Journal *
In sum, Shakespeare and Ecology is the very best introductory volume that we now have on the topic, and I expect that we will be engaging it in our research and in our teaching for some time to come. * Vin Nardizzi, Renaissance Quarterly *
I can think of no better way to celebrate [Shakespeare's] 400th anniversary than reading this book. * Horatio Morpurgo, Resurgence & Ecologist *

About Randall Martin (Professor of English, University of New Brunswick)

Randall Martin holds degrees from Toronto, Birmingham, and Oxford. He is the author of Women, Murder, and Equity in Early Modern England (2007), and he has edited Every Man Out of His Humour for The Cambridge Works of Ben Jonson (2012) and Henry VI Part Three for the Oxford Shakespeare (2001). He has also recently co-edited Shakespeare/Adaptation/Modern Drama with Katherine Scheil (2011).

Ecological Modernity in Shakespeare: an overview ; 1. Localism, Deforestation, and Environmental Activism in The Merry Wives of Windsor ; 2. Land-uses and Convertible Husbandry in As You Like It ; 3. Gunpowder, Militarization, and Threshold Ecologies in Henry IV Part Two and Macbeth ; 4. Biospheric Ecologies in Cymbeline ; 5. Evolutionary Ecology in Hamlet and Antony and Cleopatra ; Epilogue ; Further Reading