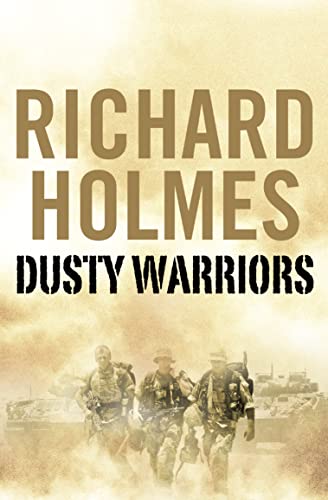 Our foremost military historian offers us a compelling and at times terrifying account of what it means to be a contemporary soldier.

Our foremost military historian offers us a compelling and at times terrifying account of what it means to be a contemporary soldier.

In this remarkable book, Richard Holmes draws on the testimonies of the 700 soldiers of the Princess of Wales Royal Regiment to capture in vivid detail the average soldier's day-to-day experience of war. Embroiled in a conflict often too dangerous for reporters to cover, these soldiers - most of them young, many without any previous experience of warfare - have kept ongoing records of the drudgery, anxiety and horror involved in fighting a violent and increasingly unpopular war against a ruthless and resourceful enemy. All have risked their lives, and many have died. Others have been recognised and awarded for their courage, resourcefulness and gallantry - Private Johnson Beharry recently became the first man to be awarded the Victoria Cross in twenty-three years.

With these intimate and revealing glimpses of life in the modern army, Richard Holmes paints a sweeping portrait of a new generation of soldiers - grunts, gallants and heroes - and the sacrifices their decision to fight for their country entails.

`Richard Holmes's "Dusty Warriors" is an important study...the book is an invaluable insight into the workings of a modern infantry regiment and a diary of the remarkable events that the men of the 1st PWRR battle group experienced on tour...it also provides a compelling and fast-moving narrative of the courage, restraint and fortitude shown by British soldiers in impossible circumstances...the action is superbly described...gripping...an important milestone for future generations wanting to understand the British Army and the post invasion turbulence of Iraq...essential reading.' Sunday Times

`Vivid, gripping and, at times, highly emotional reading...If you have any interest in what life is like for the modern British soldier, "Dusty Warriors" is essential reading. Richard Holmes is a first-rate writer and with this exciting, affectionate account of his regiment at war he has set a standard for other military authors to aspire to.' Daily Mail

`You will not be able to put it down...thought-provoking and profoundly perceptive...it is a piece of contemporary military history written with the author's trademark fluency, pace and wit...This book will open eyes to the stirring realities of life at the tip of the bayonet...Any prime minister in waiting would fail in his duty if he were not to read this book.' Spectator

Celebrated military historian and television presenter Richard Holmes is famous for his BBC series `Rebels and Redcoats: The American Revolutionary War'; `Wellington: The Iron Duke'; `Battlefields'; `War Walks' and `The Western Front'. He is the author of many bestselling and widely acclaimed books including `Firing Line', `The Western Front', `Redcoat', `Tommy' and `Sahib'. He is general editor of the definitive `Oxford Companion to Military History'. He taught military history at Sandhurst for many years and is now Professor of Military and Security Studies at Cranfield University and the Royal Military College of Science. His biography of the Duke of Marlborough is published by HarperCollins in 2008. He lives near Winchester in Hampshire.

GOR001058748
Dusty Warriors: Modern Soldiers at War by Richard Holmes
Richard Holmes
Used - Very Good
Paperback
HarperCollins Publishers
2007-02-05
316
0007212852
9780007212859
N/A
Book picture is for illustrative purposes only, actual binding, cover or edition may vary.
This is a used book - there is no escaping the fact it has been read by someone else and it will show signs of wear and previous use. Overall we expect it to be in very good condition, but if you are not entirely satisfied please get in touch with us.