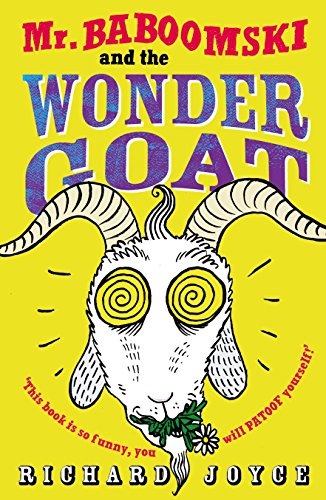 Mr. Baboomski and the Wonder Goat
by Richard Joyce

In Stock
£5.49
A new kid in town, a washed-up circus owner and a performing goat - three unlikely friends, all struggling to fit in. Together they'll make you laugh, cry and shout Skaboonky!
Very Good Good
Only 1 left

Mr. Baboomski and the Wonder Goat by Richard Joyce

Tom's life takes a turn for the worse when his Dad ups sticks and moves them to Trefuggle Bay. But things get interesting when he meets two unusual new friends. Parked in an old caravan at the end of a cliff, live two legends of the Escorvian circus. The amazing Berto Baboomski and his performing goat Zoltan. Berto may be a crazy-looking nutcake with a bonkers moustache, but he's full of circus wisdom - which he passes onto Tom, along with a few tricks. Soon Tom's new found circus skills are put to the test as he, Berto, and Zoltan put on a show-stopping performance in order to save the town from some truly fishy goings on. As Berto would say 'This skaboonky story will have you cheerzing like a nutcracker!'

Richard Joyce has written two adult non-fiction books, the first about cricket - a sport he has an unhealthy obsession with - was nominated for the MCC and Cricket Society Book of the Year. His first book for children is the product of an alphabetical negotiation: his family lobbied him for a pet, he offered them an ant, they badgered him for a badger, he countered with offers of a centipede, dust mite, earwig and flea; in the end they settled on a story about a goat. He lives in Hertfordshire with his wife and three children. Freya Hartas is a UK based illustrator. She specializes in conjuring up strange characters, animals and monsters- creating fantastical worlds for them to inhabit and get lost in. Her first picture book Little Kong will publish with Lemniscaat in October 2015. She has also illustrated teen series The Dark Lord published by Orchard Books.

GOR007308414
Mr. Baboomski and the Wonder Goat by Richard Joyce
Richard Joyce
Used - Very Good
Paperback
Oxford University Press
2015-12-23
208
0192744607
9780192744609
N/A
Book picture is for illustrative purposes only, actual binding, cover or edition may vary.
This is a used book - there is no escaping the fact it has been read by someone else and it will show signs of wear and previous use. Overall we expect it to be in very good condition, but if you are not entirely satisfied please get in touch with us.