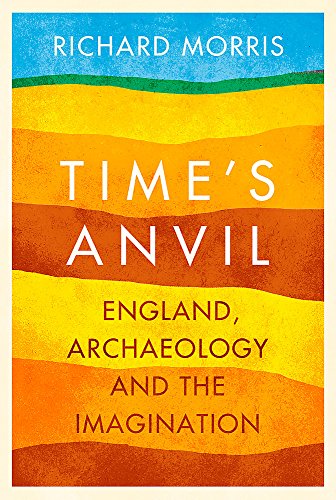 In Stock
£5.99
A personal and lyrical rediscovery of the history of England through archaeology and the imagination
Very Good Well Read
Only 2 left

Time's Anvil: England, Archaeology and the Imagination by Richard Morris

History thrives on stories. Time's Anvil explores archaeology's influence on what such stories say, how they are told, who tells them and how we listen.

In a dazzlingly wide-ranging exploration, Richard Morris casts fresh light on three quarters of a million years of history in the place we now think of as England. Drawing upon genres that are usually pursued in isolation - such as biography, poetry, or physics - he finds potent links between things we might imagine to be unrelated. His subjects range from humanity's roots to the destruction of the wildwood, from the first farmers to industrialization, and from Tudor drama to twentieth-century conflict. Each topic sits at a different point along the continuum between epoch and the fleeting moment.

In part, this is a history of archaeology; in part, too, it is a personal account of the author's history in archaeology. But mainly it is about how the past is read, and about what we bring to the reading as well as what we find. The result is a book that defies categorization, but one which will by turns surprise, enthral and provoke anyone who cares for England, who we are and where we have come from.

The press release for this remarkable book announces that it 'defies categorisation'. It is not wrong. Longlisted for the Samuel Johnson prize, Time's Anvil contemplates what is now England over a span of 750,000 years.

Sometimes we are left with snapshots, including the varying view from Paviland Cave over the last 29,000 years; elsewhere the text lingers, as with the felling of the Old Wood. Along the way we meet eminent practitioners of many disciplines, as archaeology itself emerges and the stories it tells evolve. 'Archaeology', we are told, 'might be seen as but a late ripple in the cult of ancestors'. An acquired taste, perhaps, but presenting archaeology in this way has created an especially thought-provoking read

-- Matthew Symonds * ARCHAEOLOGY.CO.UK *
"This is a remarkable, and in many respects a very courageous book - he puts himself on the line" -- Francis Pryor * THE TIMES *
Combining literature and myth with science, it explores how the past is read and the relevance and role of archaeology while challenging assumptions about our history. * CHOICE *
This fascinating book - a combination of the author's autobiography and a biography of the science of archaeology in England since the 17th century - suggests that some historical truths are found and proved, rather than created, by archaeology -- Dr Julian Litten * CHURCH TIMES *
For Morris, this book is an 'expedition' into the past, and as such it is both expansive and singular. But Time's Anvil is also an impassioned history and defence of archeology, a history of humanity in England and a heartfelt mediation on transience and mortality. -- Nick Groom * THE INDEPENDENT *
This compendious and rich portmanteau comprises an array of exercises in championing archaeology against those who would decry its academic and scientific validity. * LITERARY REVIEW *
(An) undeniably curious book...the story of archeology, mixed with the author's personal and family history, and interspersed with a smattering of scientific discourse, and a fair bit of poetry. * BBC HISTORY *
An ambitious mixture of memoir, history and historiography, taking in England's prehistory and her later revolutions and battles, and en route offering a passionate paean to archaeology. * THE SUNDAY TELEGRAPH *
For too long we have been taught about the past from "above" - from eminent people, kind enough to spare their thoughts. This book allows us to regain possession and to make archaeology personal again. -- Francis Pryor * THE TIMES *
A Harrogate man's compelling and unusual history book has now been printed in paperback after making the longlist for this year's Samuel Johnson Non-Fiction Prize. -- Graham Chalmers * HARROGATE ADVERTISER *
(Morris) mixes a history of archaeology with family memoirs and a vista of the past from the Mesolothic era to industrial Birmingham - his home soil. The result is a richly textured, and very moving hybrid: as studded with jewels as the mud around an Anglo-Saxon tomb. The ground beneath your feet will never feel the same again. -- Boyd Tonkin * INDEPENDENT *

Richard Morris is emeritus professor of archaeology at the University of Huddersfield. He began his career working on excavations under York Minster in 1971. Since then he has worked as a university teacher, as director of the Council for British Archaeology, as director of the Leeds Institute for Medieval Studies, and as a writer and composer. His book Churches in the Landscape (1989) is widely regarded as a pioneering classic. Time's Anvil: England, Archaeology and the Imagination was longlisted for the Samuel Johnson Prize and shortlisted for the Current Archaeology Book of the Year Award. He is completing a new biography of the aeronautical engineer Barnes Wallis, and working on a social history of interwar England from the air.

GOR004733411
Time's Anvil: England, Archaeology and the Imagination by Richard Morris
Richard Morris
Used - Very Good
Hardback
Orion Publishing Co
2012-11-08
480
0297867830
9780297867838
Long-listed for Samuel Johnson Prize for Non-Fiction 2013 (UK)
Book picture is for illustrative purposes only, actual binding, cover or edition may vary.
This is a used book - there is no escaping the fact it has been read by someone else and it will show signs of wear and previous use. Overall we expect it to be in very good condition, but if you are not entirely satisfied please get in touch with us.