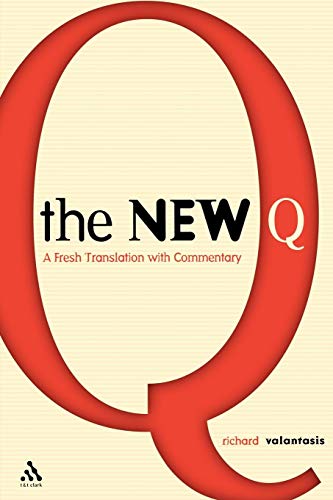 The New Q
by Richard Valantasis

In Stock
£5.99
Provides a translation of the early "Sayings Gospel" known as "Q". This book will guide people through their reading of the texts themselves so that readers will be able to judge the validity of other scholars' reconstructions. The author provides a commentary on each of the sayings.
Very Good
Only 4 left

The New Q: A Translation with Commentary by Richard Valantasis

The American and European public has a voracious appetite for more information about Jesus and the formation of early Christianity. The best-selling books on the subject by Marcus Borg, John Dominic Crossan, John Meyer, and Luke Timothy Johnson, among many others, attest to this hunger. But each of these scholars presents his own reading of the historical information, usually beginning with the earliest known Jesus-related material, Jesus' sayings, and leads the public into a particular understanding of Jesus and the early Jesus movements. The New Q will provide the general public with the original source through a fresh translation of the early Sayings Gospel known as Q. This book will guide people through their reading of the texts themselves so that readers will be able to judge the validity of other scholars' reconstructions. The New Q is the companion volume necessary to understand the current writing on the historical Jesus and the history of earliest Christianity. Valantasis provides a new translation of the Synoptic Sayings Source, Q. He translates each section from the Greek of the critical edition of Robinson and Kloppenborg, and he gathers the translation of the full text as a coherent collection of sayings at the end of the book. Avoiding the scholarly arguments that make Q inaccessible, as well as the constant comparison of Matthew and Luke, this commentary will straightforwardly present the text based on the work of those scholars who have provided a critical edition. It provides an initial reading in a language appropriate to religious seekers. The translation itself will be fresh and provocative, since its meaning and interpretation are not linked to its later use in the narrative gospels of Mark, Matthew, and Luke. In fact, readers of this translation will be able to hear the sayings of Jesus as Matthew and Luke heard them before the writing of their gospels. The goal is to recreate the kind of challenging and intellectually stimulating engagement with the sayings that probably put Christianity on the Roman map. Readers will be able to encounter Jesus' voice and the voices of early Christians directly, without the intrusion of the later use of these sayings by the gospel writers. Valantasis also provides a commentary on each of the sayings. The commentary will focus on three facets: what the saying says, what it could have meant at the time, and how is was used by early Christians. The first two questions provide the basic information by developing a literary analysis of the sayings (a reading of Jesus' words) and by positing a significance for the saying in the context of earliest Christianity (what the saying could have meant). The final question directs the reading of the saying toward its use by religious people then and now as a means of forging an alternative subjectivity, defining new religious and social relationships, and constructing an alternative understanding of the nature of the spiritual and physical world. In other words, this commentary will provide an ascetical reading of the sayings to explore the manner in which the sayings source might have been read by individuals and communities in antiquity, and it will provide an alternative to the currently established reading of the sayings in modern scholarship primarily as a window on the historical Jesus' doctrines and teaching.

'Valantasis's present work allows one to read the reconstructed "Q" source straight through. The translation has a promised freshness...'--Sanford Lakoff "Church Times "
'Fans of Hans Kung who have not yet seen this important book will no doubt want to. Critics of his views ought to see it to look again at his account of the situations and controversies in which he was involved. Those interested in the history of theological thought...might read it as an important contribution from a major theologian.' 'Controversial, vigourouss, courageous, always thoughtful' 'The man and the theology are bound together with passion and excitement.'--Sanford Lakoff "Baptist Times "
'Valantasis' commentary provides a generally reliable guide to the theology of Q....the point of the book by Valantasis, [may be] to make Q accessible to a wider public.' Paul Foster, Expository Times, 1 August 2006--Sanford Lakoff "Expository Times "

Richard Valantasis is Professor of New Testament and Christian Origins at Iliff School of Theology in Denver, Colorado. He is the author of Third Century Spiritual Guides, Gospel of Thomas, Centuries of Holiness, editor of Religions of Late Antiquity in Practice, and co-editor of Asceticism.

Acknowledgments; Introduction; The Commentary; The Translation of the Text; Subject area (include more than one if appropriate): New Testament; early Christianity.

GOR002778517
The New Q: A Translation with Commentary by Richard Valantasis
Richard Valantasis
Used - Very Good
Paperback
Bloomsbury Publishing PLC
2005-12-22
250
0567025616
9780567025616
N/A
Book picture is for illustrative purposes only, actual binding, cover or edition may vary.
This is a used book - there is no escaping the fact it has been read by someone else and it will show signs of wear and previous use. Overall we expect it to be in very good condition, but if you are not entirely satisfied please get in touch with us.