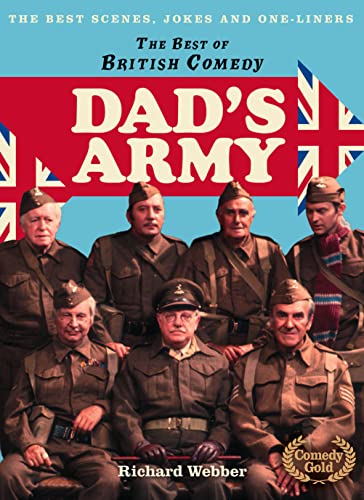 Dad's Army (The Best of British Comedy) by Richard Webber

'People shout the "Don't tell him, Pike!" line at me regularly - and I didn't even say it!' Philip Madoc.

In the annals of British television, no finer example of classic comedy exists than in the shape of Dad's Army, the Home Guard-based sitcom written by veteran writers Jimmy Perry and David Croft. Although they penned many other sterling programmes, including Hi-De-Hi! and the underrated You Rang, M'Lord?, they'll forever be remembered for their brilliant wartime comedy spotlighting the antics of the Walmington-on-Sea Home Guard, led by the irascible and pompous Captain Mainwaring.

Between 1968 and '77, nine series and three Christmas Specials - totalling 80 instalments - were screened, much to the delight of the millions of fans who tuned in; but the show's popularity has continued unabated and even today, four decades since the platoon marched onto the scene, it remains one of the golden offerings from the sitcom genre.

With the 40th anniversary of Dad's Army in 2008, what better time to celebrate the magic of this show.

* The History: an overview of how Dad's Army was born and developed
* Gags and Catchphrases: a collection of classic quotes from the programme
* Did You Know?: snippets of info about the show, cast, etc.
* Favourite scenes: the most memorable scenes in full
* A Dad's Army quiz

Episode: 'Something Nasty in the Vault'

Mainwaring and Wilson are stuck in the bank's strong room. There has been an air raid and they've ended up holding an unexploded bomb. Pike arrives.

Pike: Uncle Arthur?
Wilson: Oh, what it is, Frank?
Pike: Do you think I ought to phone mum and tell her you're holding a bomb?
Wilson: No!
Pike: But she might get cross if she found out that you'd been holding a bomb and she wasn't told about it.

As a journalist and writer, Richard Webber writes regulary about TV, contributing to a host of newspapers and magazines, including TV Quick, Daily Express, Sunday Express and the Sunday Telegraph and is the author of over a dozen books celebrating classic comedy, such as The A-Z of Dad's Army, The A-Z of Only Fools and Horses, The Complete One Foot in the Grave, Are You Being Served? - 25 Years, Rising Damp - A Celebration, Porridge - The Inside Story and The Complete A-Z of Everything Carry On.

GOR000674894
Dad's Army (The Best of British Comedy) by Richard Webber
Richard Webber
The Best of British Comedy
Used - Very Good
Hardback
HarperCollins Publishers
2008-10-01
160
0007285302
9780007285303
N/A
Book picture is for illustrative purposes only, actual binding, cover or edition may vary.
This is a used book - there is no escaping the fact it has been read by someone else and it will show signs of wear and previous use. Overall we expect it to be in very good condition, but if you are not entirely satisfied please get in touch with us.