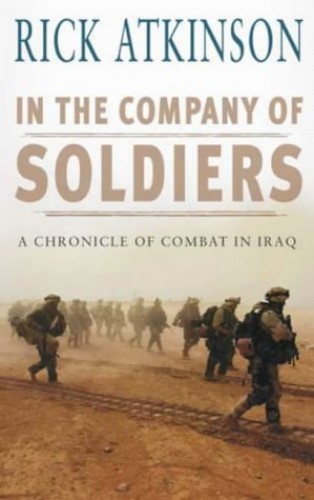 In The Company Of Soldiers
by Rick Atkinson

An insider's account of the recent Iraq War by Pulitzer prize-winning historian and author of An Army at Dawn.
A vivid, utterly fresh view of the modern soldier in action, told by a premier military historian.

In The Company Of Soldiers Summary

In The Company Of Soldiers: A Chronicle of Combat in Iraq by Rick Atkinson

During the recent war in Iraq, renowned historian Rick Atkinson was embedded with the 101st Airbourne Division of the US forces. He had access to the headquarters command post and the top-secret plans tent and spent most days at the elbow of Major General David H. Petraeus as he directed attacks on the cities of Najaf, Karbala, Hilla and, ultimately, southern Baghdad.

This short book, written with a strong first-person narrative, will not only provide a unique insight into the course of events; using the microcosm of the 101st, Atkinson will also reveal much about the contemporary US military and the soldiers who compose it. In his unique hands this book is set to become a classic of war journalism and the only book to buy for an insider's account of America's war in Iraq.

In The Company Of Soldiers Reviews

Full of fascinating insights about a campaign that deserves to be much better known to British readers than it is * SUNDAY TELEGRAPH *
Atkinson gives full rein to imaginative projection, and revels in vivid cinematic sketches and quirky detail * FINANCIAL TIMES *
A compelling and highly readable story * DAILY TELEGRAPH *
In the Company of Soldiers is a thoroughly engrossing look at the strategies, personalities, and struggles of waging modern warfare. The advent of embedded reporters in the opening days of the 2003 US war on Iraq meant a more direct and personal point of * Much of Atkinson's focus falls on the division's leader, the hugely competitive and charismatic Major General David Petraeus, who seems to guide his troops through Iraq by sheer force of will. Atkinson devotes most of his time to the senior commanders, bu *

Rick Atkinson is a former staff writer and assistant managing editor at The Washington Post, and the bestselling author of The Long Gray Line and Crusade. His many awards include the Pulitzer Prize for An Army At Dawn.

GOR002785450
In The Company Of Soldiers: A Chronicle of Combat in Iraq by Rick Atkinson
Rick Atkinson
Used - Very Good
Paperback
Little, Brown & Company
2004-05-06
336
0316727334
9780316727334
N/A
Book picture is for illustrative purposes only, actual binding, cover or edition may vary.
This is a used book - there is no escaping the fact it has been read by someone else and it will show signs of wear and previous use. Overall we expect it to be in very good condition, but if you are not entirely satisfied please get in touch with us.