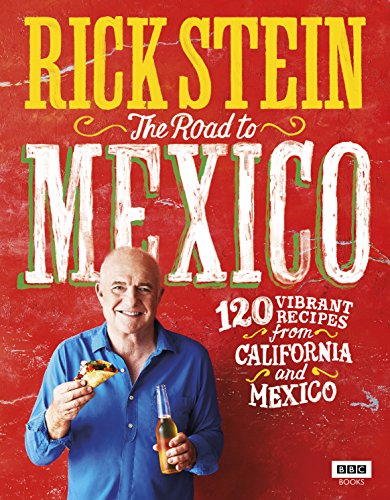 Rick Stein: The Road to Mexico
by Rick Stein

Out of Stock
£16.99
Starting in San Francisco and Baja California, and working his way down to the southernmost tip of Mexico, the author cooks, eats and experiences Mexican food at its very best and most diverse. He covers topics ranging from seafood of the north Pacific coast, and the mole of Oaxaca, to the spices and salsas of Yucatan and Quintana Roo.
Like New
Only 0 left

Rick Stein: The Road to Mexico by Rick Stein

"My family's favourite TV chef (he's done more to teach my children to cook than I have)... [he] has a knack for pulling together the dishes that best sum up countries and regions." Diana Henry, The 20 best cookbooks to buy this autumn

OFM Food Personality of the Year 2017

Rick Stein brings his unrivalled enthusiasm and trusted expertise to the fresh, flavourful food of Mexico and California. No one better captures the food essence of a country and brings the best recipes into our kitchens like Rick.

Starting in San Francisco and Baja California, and working his way down to the southernmost tip of Mexico, Rick Stein cooks, eats and experiences Mexican food at its very best and most diverse.

Whether it's the farmers' markets of California, full of sourdough bread, new season garlic and a profusion of citrus fruit; the prawns, snapper and tuna of the Pacific or the glorious street food and colourful markets of Mexico with their avocados, chillies, tomatillos, cheese and corn, this is a part of the world packed with natural, healthy and satisfying ingredients.

Showcasing Rick's authentic style, with recipes like Ensenada Fish Tacos with Chilli, Deep Fried Coconut Prawns and Slow Cooked Pork Tacos, this cookbook will encourage anyone to try out the bold food of these sunshine states.

"Whether you're an armchair traveler or an adventurous cook, you're sure to enjoy this book." --Sandra's Kitchen Nook

Rick Stein's passion for using good-quality local produce and his talent for creating delicious recipes in his books and restaurants have won him a host of awards, accolades and fans. As well as presenting a number of television series, he has published many best-selling cookery books, including French Odyssey, Coast to Coast, Far Eastern Odyssey, Rick Stein's Long Weekends and Rick Stein's India.

Rick has always believed in showcasing local seafood and farm produce in his four restaurants in Padstow, Cornwall, where he also has a cookery school, food shops and a pub in the nearby village of St Merryn. In 2018 Rick was awarded an CBE for services to the economy. He divides his time between Padstow, London and Australia, where he also has two seafood restaurants by the sea in Mollymook, and Port Stephens NSW.

GOR008913745
Rick Stein: The Road to Mexico by Rick Stein
Rick Stein
Used - Like New
Hardback
Ebury Publishing
2017-10-19
320
178594200X
9781785942006
N/A
Book picture is for illustrative purposes only, actual binding, cover or edition may vary.
This is a used book - there is no escaping the fact it has been read by someone else and it will show signs of wear and previous use. Overall we expect it to be in very good condition, but if you are not entirely satisfied please get in touch with us.