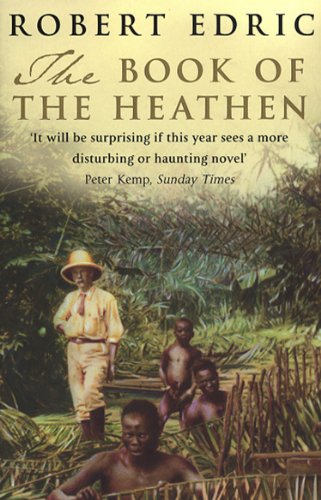 The Book Of The Heathen
by Robert Edric

The Book Of The Heathen Summary

The Book Of The Heathen by Robert Edric

1897. In an isolated station in the Belgian Congo, an Englishman awaits trial for the murder of a native child. Imprisoned in a makeshift gaol, Nicholas Frere awaits the arrival of the Company's official investigator, while his friend, James Frasier, attempts to determine the circumstances which surround the charge. The world around them is rapidly changing: the horrors of the Belgian Congo are becoming known and the flow of its once-fabulous wealth is drying up. Unrest flares unstoppably into violence. Frere's coming trial will seek to determine considerably more than the killing of a child. But at the heart of this conflict lies a secret so dark, so unimaginable, that one man must be willingly destroyed by his possession of it, and the other must both sanction and participate in that destruction. 'More disturbing even than Conrad in his depiction of the heart of darkness . . . it will be surprising if this year sees a more disturbing or haunting novel' Peter Kemp, Sunday Times 'Relentless . . . an impressive and disturbing work of art' Robert Nye, Literary Review 'Edric describes a compelling plot in fine, spare prose' David Isaacson, Daily Telegraph

The Book Of The Heathen Reviews

"'Relentless . . . an impressive and disturbing work of art'" -- Robert Nye * Literary Review *
"'Precise and compelling . . . maintains a relentless hold on the reader's interest . . . a fable about versions of truth and moral responsibility. It also belongs to a very British tradition: the mapping of non-Europe as a nightmare world in which the European psyche confronts its own dark madness'" -- Aamer Hussein * Independent *
"'Rendered in prose whose steadiness and transparency throw the dark turbulence of what is happening into damning relief'" -- Peter Kemp * The Sunday Times *
"'A very gripping story . . . the reader is drawn in inexorably to discover what horror lies at the heart of it . . . an apocalyptic fable for today'" -- John Spurling * The Times Literary Supplement *
"'Many respectable judges would put Edric in the top ten of British novelists currently at work . . . as a writer, he specialises in the delicate hint and the game not given away'" -- D.J. Taylor * Spectator *

Robert Edric was born in 1956. His novels include Winter Garden (1985 James Tait Black Prize winner), A New Ice Age (1986 runner-up for the Guardian Fiction Prize), A Lunar Eclipse, The Earth Made of Glass, Elysium, In Desolate Heaven, The Sword Cabinet, The Book of the Heathen (shortlisted for the 2001 WH Smith Literary Award) and Peacetime (longlisted for the Booker Prize 2002). He is also the author of the widely-acclaimed Song Cycle Trilogy, which comprises Cradle Song, Siren Song and Swan Song.

GOR001091297
The Book Of The Heathen by Robert Edric
Robert Edric
Used - Very Good
Paperback
Transworld Publishers Ltd
2001-07-02
352
0552999253
9780552999250
N/A
Book picture is for illustrative purposes only, actual binding, cover or edition may vary.
This is a used book - there is no escaping the fact it has been read by someone else and it will show signs of wear and previous use. Overall we expect it to be in very good condition, but if you are not entirely satisfied please get in touch with us.