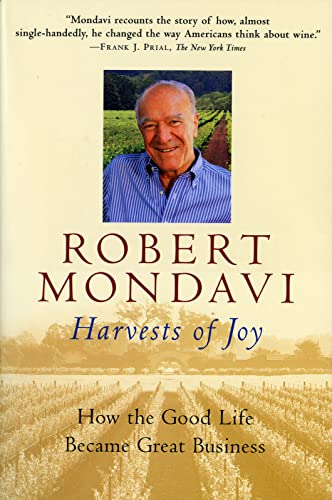 In Stock
£4.49
The secrets of success and the inspiring story of one of the world's greatest wineries, by the man who revolutionized America's wine business. Two 8-page photo inserts.
Very Good
Only 3 left

In 1965, after a notorious family feud, Robert Mondavi-then fifty-two years old-was thrown out of his family's winery. Far from defeated, Mondavi was dedicated to a vision of creating a superior wine. What has happened since that fateful day is one of the greatest success stories of American business. Today, the Robert Mondavi Winery is one of the most respected in the world, and Mondavi is the man who is most responsible for the worldwide recognition of American wine making, as well as changing America's palate for fine wine and fine food. In Harvests of Joy, Mondavi shares how, through his passion for excellence, he achieved this extraordinary position, one he reached not without pain and sacrifice. With invaluable insider tips on his approach to both wine making and to running a business, Mondavi's inspirational story is "a grand example of the fact that in America you can pretty much be, do, or accomplish, whatever you set out to." (Ventura County Star)

"No one has been more closely associated with the California wine revolution than Robert Mondavi. Probably because he started it."-the New York Times
"The hottest wine book for holiday gift-giving is Robert Mondavi's new autobiography Harvests of Joy."-The Ottawa Sun
"For businessmen and dreamers, here's business advice mixed with inspirational enthusiasm from a man who . . . built himself into a world-recognized symbol of quality California wine."-Wine & Spirits

Robert Mondavi (1913-2008) founded the Robert Mondavi Winery, one of the most respected wineries in the world. He was the recipient of numerous honors and awards, including Winemaker of the Year and the Harvard Business School Association Business Leader of the Year.

GOR004753457
Harvests of Joy: How the Good Life Became Great Business by Robert G. Mondavi
Robert G. Mondavi
Used - Very Good
Paperback
Harcourt Brace International
1999-10-07
400
0156010569
9780156010566
N/A
Book picture is for illustrative purposes only, actual binding, cover or edition may vary.
This is a used book - there is no escaping the fact it has been read by someone else and it will show signs of wear and previous use. Overall we expect it to be in very good condition, but if you are not entirely satisfied please get in touch with us.