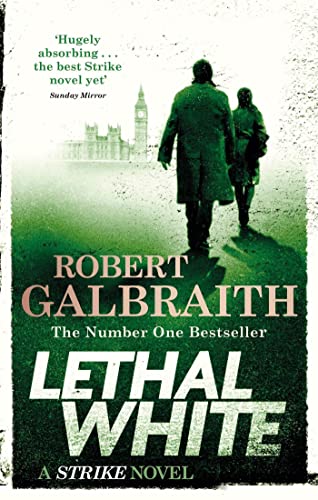 Used Price
£3.59
New RRP £8.99
Free Shipping in the UK
LETHAL WHITE is both a gripping mystery and the page-turning next instalment in the highly acclaimed series featuring Cormoran Strike and Robin Ellacott, written by J.K. Rowling under the pseudonym Robert Galbraith.
Like New Very Good Good Well Read

'Fans will love it' HEAT

When Billy, a troubled young man, comes to private eye Cormoran Strike's office to ask for his help investigating a crime he thinks he witnessed as a child, Strike is left deeply unsettled. While Billy is obviously mentally distressed, and cannot remember many concrete details, there is something sincere about him and his story. But before Strike can question him further, Billy bolts from his office in a panic.

Trying to get to the bottom of Billy's story, Strike and Robin Ellacott - once his assistant, now a partner in the agency - set off on a twisting trail that leads them through the backstreets of London, into a secretive inner sanctum within Parliament, and to a beautiful but sinister manor house deep in the countryside.

And during this labyrinthine investigation, Strike's own life is far from straightforward: his newfound fame as a private eye means he can no longer operate behind the scenes as he once did. Plus, his relationship with his former assistant is more fraught than it ever has been - Robin is now invaluable to Strike in the business, but their personal relationship is much, much more tricky than that . . .

The most epic Robert Galbraith novel yet, LETHAL WHITE is both a gripping mystery and a page-turning next instalment in the ongoing story of Cormoran Strike and Robin Ellacott.

PRAISE FOR THE STRIKE SERIES:

'The work of a master storyteller' DAILY TELEGRAPH

'Will keep you up all night' OBSERVER

Robert Galbraith is a pseudonym for J.K. Rowling, bestselling author of the Harry Potter series and The Casual Vacancy. All four Strike novels, The Cuckoo's Calling, The Silkworm, Career of Evil and Lethal White, topped the national and international bestseller lists and the series has been adapted for television, produced by Bronte Film and Television.

GOR009929988
Lethal White: Cormoran Strike Book 4 by Robert Galbraith
Robert Galbraith
Used - Like New
Paperback
Little, Brown Book Group
2019-04-18
784
075157287X
9780751572872
Short-listed for Audible Sounds of Crime Award at Crimefest 2019 (UK)
Book picture is for illustrative purposes only, actual binding, cover or edition may vary.
The book has been read, but looks new. The book cover has no visible wear, and the dust jacket is included if applicable. No missing or damaged pages, no tears, possible very minimal creasing, no underlining or highlighting of text, and no writing in the margins.