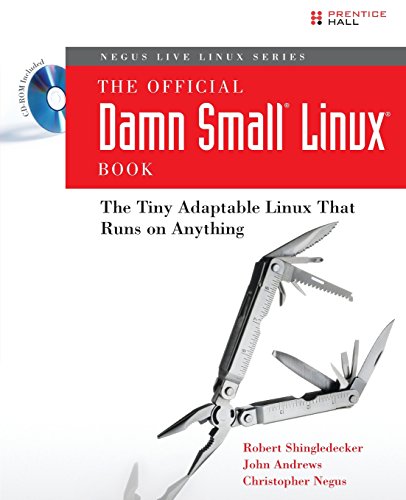 The Official Damn Small Linux Book: The Tiny Adaptable Linux That Runs on Anything by Robert Singledecker

Damn Small Linux (DSL) is a super-efficient platform for everything from custom desktops to professional servers. Now, DSL's creator and lead developer have written the first definitive, practical guide to this remarkable system. The Official Damn Small Linux Book brings together everything you need to put DSL to work in just minutes. Simply learn a few essentials, boot the live CD-ROM, and master the rest...one step at a time, hands-on.

If you're new to Linux, you can quickly discover how to use DSL to take your data on the road, safely running your programs and personal environment on nearly any computer. Easily adapt DSL to run on anything from an alternative device (Internet appliance, hand-held, diskless PC, or mini-ITX system) to an older PC that might otherwise be headed for landfill.

Use this book and CD-ROM package to

Your Practical, Hands-On Guides to Getting Real Results with Free Software

Every book in this series encourages and challenges you to advance in the free software world. Boot the accompanying live DVD or CD and watch the Linux system, applications, and content described in the book come to life. When you finish, you'll know how to use, customize, and rebuild that open source software. Start as a novice, by trying out examples...and finish as a professional!

Robert Shingledecker's IT career spans 35 years, beginning with hand-coding machine language programs targeted for Burroughs Corporation minicomputers. Later, he enjoyed using an assembler and then COBOL. Always having a passion for computers, he was an advocate for COMAL, and was an early hacker on MINIX and Coherent OS. In regards to Linux projects, Robert led the first large-scale deployment of Linux in the city of Garden Grove, California, where in 1994 he deployed Samba on DG/UX systems. He also designed a massively scalable Linux/AOLserver/Sybase e-commerce system. Robert then became CTO of several Linux-based dot-com companies. While building Linux-based, no install, live CD-ROM appliances, including firewalls, VPN, web, email, and database appliances, he became interested in Damn Small Linux. Soon, Robert joined John Andrews to help lead Damn Small Linux development. Now retired, Robert spends his time writing code and working on Damn Small Linux. He also enjoys traveling.

John Andrews is the creator of Damn Small Linux (DSL). As owner of a bead and jewelry store in 1996, John learned HTML and Perl to develop his own website. It eventually broadened to running websites for others on Linux servers. His interest in Linux encouraged him to switch to a Linux desktop full time. The appeal of fast and efficient applications led John to develop Damn Small Linux. After trying several mini-distributions, primarily for diagnostic and system recovery, John wanted to build a sub-50MB distribution that essentially had what he needed to accomplish a day's work; the result was the Damn Small Linux distribution. John's proficiencies include Perl, shell scripting, Lua, awk, *SQL, php, and some C programming languages.

Christopher Negus has been one of the world's leading writers of Linux books for nearly a decade. His Red Hat Linux Bible series has sold more than one-quarter million copies worldwide. Chris also authored or coauthored the books Linux Bible (2005 through 2007 editions), Linux Toys, Linux Toys II, and Linux Troubleshooting Bible for Wiley Publishing. For Prentice Hall, Chris is the editor of the Negus Live Linux Series and author of that series' flagship book, Live Linux CDs. Before becoming a full-time author, Chris Negus worked on UNIX operating system development teams at AT&T Bell Labs, UNIX System Labs, and Novell in the 1980s and 1990s. In particular, Chris worked in the areas of UNIX system administration and networking. When not working on computer books, Chris likes to spend time with his family: Sheree, Seth, and Caleb. Chris also enjoys playing soccer, singing opera (when nobody can hear him), and making things out of old computers.

About the Authors xix

GOR004408365
The Official Damn Small Linux Book: The Tiny Adaptable Linux That Runs on Anything by Robert Singledecker
Robert Singledecker
Used - Very Good
Hardback
Pearson Education (US)
2007-08-06
448
0132338696
9780132338691
N/A
Book picture is for illustrative purposes only, actual binding, cover or edition may vary.
This is a used book - there is no escaping the fact it has been read by someone else and it will show signs of wear and previous use. Overall we expect it to be in very good condition, but if you are not entirely satisfied please get in touch with us.