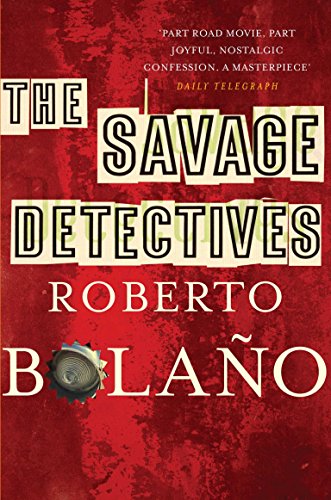 The Savage Detectives
by Roberto Bolano

The Savage Detectives by Roberto Bolano

With an afterword by Natasha Wimmer.

Winner of the Herralde Prize and the Romulo Gallegos Prize. Natasha Wimmer's translation of The Savage Detectives was chosen as one of the ten best books of 2007 by the Washington Post and the New York Times.

Spanning two decades and crossing continents, theirs is a remarkable quest through a darkening universe - our own. It is a journey told and shared by a generation of lovers, rebels and readers, whose testimonies are woven together into one of the most dazzling Latin American novels of the twentieth century.

Savagely comic yet equally tender . . . This novel is an elegy for a generation. * Independent *
The comic frenzy, the inventiveness of character and situation, and the mood-soaked depiction of 1970s Mexico is delightful. * Times Literary Supplement *
A portrait of people for whom literature is bread and water, sex and death. The abiding message to be taken from Bolano's novel, and maybe from his fraught life, too: books matter. * GQ *
It's no exaggeration to call Bolano a genius. The Savage Detectives alone should grant him immortality. * Washington Post *
Bolano makes you feel changed for having read him; he adjusts your angle of view on the world. * Guardian *

Roberto Bolano was born in Santiago, Chile, in 1953. He grew up in Chile and Mexico City. His first full-length novel, The Savage Detectives won the Herralde Prize and the Romulo Gallegos Prize and Natasha Wimmer's translation of The Savage Detectives was chosen as one of the ten best books of 2007 by the Washington Post and the New York Times. Bolano died in Blanes, Spain, at the age of fifty. Described by the New York Times as "the most significant Latin American literary voice of his generation", in 2008 he was posthumously awarded the National Book Critics Circle Award for Fiction for his novel 2666.

GOR001628441
The Savage Detectives by Roberto Bolano
Roberto Bolano
Used - Very Good
Paperback
Pan Macmillan
2009-09-04
608
0330509527
9780330509527
N/A
Book picture is for illustrative purposes only, actual binding, cover or edition may vary.
This is a used book - there is no escaping the fact it has been read by someone else and it will show signs of wear and previous use. Overall we expect it to be in very good condition, but if you are not entirely satisfied please get in touch with us.