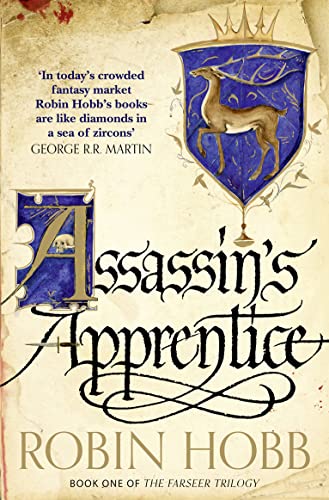 The kingdom of the Six Duchies is on the brink of civil war when news breaks that the crown prince has fathered a bastard son and is shamed into abdication. The child's name is Fitz, and he is despised.

Raised in the castle stables, only the company of the king's fool, the ragged children of the lower city, and his unusual affinity with animals provide Fitz with any comfort.

To be useful to the crown, Fitz is trained as an assassin; and to use the traditional magic of the Farseer family. But his tutor, allied to another political faction, is determined to discredit, even kill him. Fitz must survive: for he may be destined to save the kingdom.

'Hobb is one of the great modern fantasy writers ... what makes her novels as addictive as morphine is not just their imaginative brilliance but the way her characters are compromised and manipulated by politics.'
The Times

'In today's crowded fantasy market Robin Hobb's books are like diamonds in a sea of zircons'
George R.R. Martin

'Hobb is a remarkable storyteller' Guardian

'This is a historical novel with a sly touch of magic. The first in the Farseer trilogy, this book will get new readers hooked on a series that recalls HBO's Game of Thrones and The Lord of the Rings' Telegraph

GOR005807423
Assassin's Apprentice (The Farseer Trilogy, Book 1) by Robin Hobb
Robin Hobb
The Farseer Trilogy
Used - Good
Paperback
HarperCollins Publishers
2014-03-27
400
000756225X
9780007562251
N/A
Book picture is for illustrative purposes only, actual binding, cover or edition may vary.
The book has been read but remains in clean condition. All pages are intact and the cover is intact. Some minor wear to the spine.