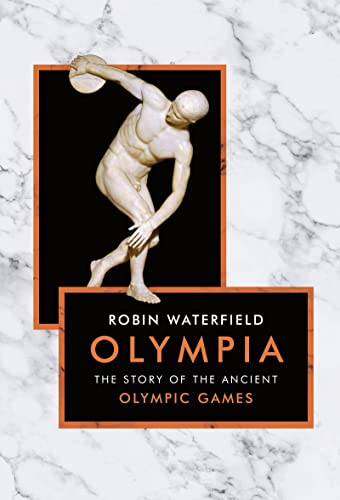 The remarkable story of the Ancient Olympic Games, narrated in invigorating style by a leading classical scholar and translator.

Olympia: The Story of the Ancient Olympic Games by Robin Waterfield

In the northwestern corner of the great peninsula of the Peloponnese, close to the meeting point of the Cladeus and Alpheus rivers, lies a peaceful river valley overlooked by the steep-sided Hill of Cronus. Here, between the eighth century BCE and the fourth century CE, rival athletes competed for glory in the ancient Olympic Games. Every four years, and from every corner of the Mediterranean world - from Samos to Syracuse and from Sparta to Smyrna - they descended on this quiet corner of southern Greece sacred to Zeus, seeking to excel in disciplines as diverse as sprinting, boxing, wrestling, trumpet blowing and chariot and mulecart racing.

The victors of these ancient games may have been awarded crowns of olive leaves in recognition of their achievements, but these original Olympics were no idealistic celebration of the classical aesthetic of grace and beauty shared by all of the participating Greek city-states, but often a bitterly contested struggle between political rivals. Robin Waterfield paints a vivid picture of the reality of the ancient Olympic Games; describes the events in which competitors took part; explores their purpose, rituals and politics; and charts the vicissitudes of their remarkable thousand-year history.

'Robin Waterfield is a gold medallist among historians of ancient Greece. This is a carefully calibrated, deeply learned and yet accessibly study of the original Olympic Games' Professor Paul Cartledge.
'[Robin Waterfield] covers everything you could ever want to know, from excavations of Olympic sites to nudity at the games, to sports in the wider Hellenic world ... Insightful, accessible, informative' All About History.
'[A] brilliant little book ... It is scintillating stuff, but at its heart is a central point that we need to understand: for the Ancient Greeks it was all about pride, honour, self-aggrandisement and winning, not taking part' Sunday Times.
'Waterfield has written a clear, well-organised, information-packed and very readable account of this influential Ancient Greek invention. Highly recommended' BBC History Magazine.
'An intriguing book, which takes us deep into the world of the Ancient Greeks' Minerva.

Robin Waterfield is a former university lecturer and translator of ancient Greek texts for Oxford University Press and Penguin. His Creators, Conquerors, and Citizens: A History of Ancient Greece was published by OUP in 2018.

GOR009498619
Olympia: The Story of the Ancient Olympic Games by Robin Waterfield
Robin Waterfield
The Landmark Library
Used - Very Good
Hardback
Head of Zeus
2018-11-01
224
1786691914
9781786691910
N/A
Book picture is for illustrative purposes only, actual binding, cover or edition may vary.
This is a used book - there is no escaping the fact it has been read by someone else and it will show signs of wear and previous use. Overall we expect it to be in very good condition, but if you are not entirely satisfied please get in touch with us.