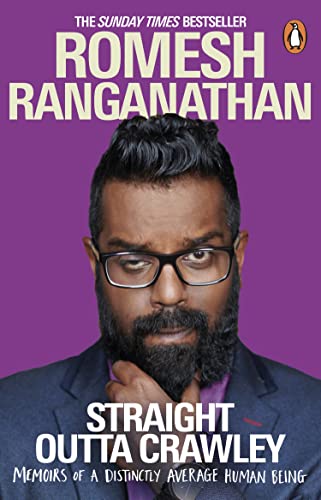 Straight Outta Crawley: Memoirs of a Distinctly Average Human Being by Romesh Ranganathan

Straight Outta Crawley is the hilarious and irreverent autobiography from comedian Romesh Ranganathan.

At the age of 9, Romesh Ranganathan delivered his first ever stand-up set at a Pontin's holiday camp talent competition, smashing the other competitor, a young girl playing the kazoo.

The gig went so well that Romesh retired his comic genius for twenty-two years, hiding behind the guise of a maths teacher, before finally revealing himself again (no, not like that) at the tender age of 31. In 2010, Ranganathan staged his epic comeback gig to an almost silent room, and has since gone on to earn his place as the most in-demand overweight vegan Sri Lankan comedian in Britain.

Now, for the first time, he tells the full story of how he got here. From the delights of Sri Lankan hospitality to his struggles as a child, teacher and now parent, to his adolescent flirtation with a rap career and his attempts to make it in comedy, Straight Outta Crawley is Ranganathan's hilarious and irreverent autobiography.

Romesh Ranganathan is a comedian and actor. A former maths teacher, he made his comedy circuit debut in 2010, and has quickly established himself as one of Britain's best loved comedy stars.

Known for his RTS Award winning series 'The Misadventures Of Romesh Ranganathan', his weekly topical show 'The Ranganation', and his Sky One sitcom 'The Reluctant Landlord', he has also travelled the globe with Rob Beckett in 'Rob & Romesh Vs', been a regular on 'A League Of Their Own' and starred in the show that first brought Romesh and his mum to the public consciousness, the BAFTA nominated 'Asian Provocateur'.

Romesh is currently in the middle of his biggest stand-up tour to date, 'The Cynic's Mixtape', which sold out theatres in record time across the UK, including a phenomenal 12-nights at Hammersmith Apollo.

Amongst all of this, he still manages to squeeze in time to record his award-winning podcast 'Hip Hop Saved My Life', to write his regular 'Midlife Crisis' column for the Guardian, and to pen his bestselling autobiography, Straight Outta Crawley.

GOR010139758
9780552173704
0552173703
Straight Outta Crawley: Memoirs of a Distinctly Average Human Being by Romesh Ranganathan
Romesh Ranganathan
Used - Very Good
Paperback
Transworld Publishers Ltd
2019-10-03
304
N/A
Book picture is for illustrative purposes only, actual binding, cover or edition may vary.
This is a used book - there is no escaping the fact it has been read by someone else and it will show signs of wear and previous use. Overall we expect it to be in very good condition, but if you are not entirely satisfied please get in touch with us
Trustpilot