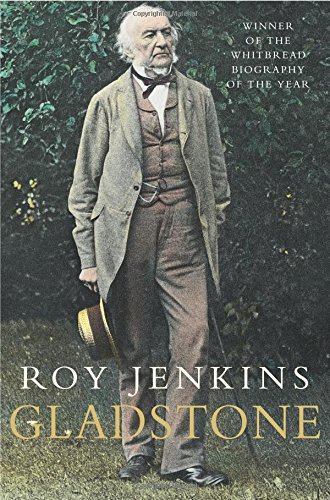 Originally published in 1995,this is a biography of William Ewart Gladstone (1809-98), which charts the political career and personal life of the only person who saw four terms as the British Prime Minister and who left behind a long and successful line of legislation. Roy Jenkins examines the manifold activities of Gladstone's life and uses it to relate the political rhythms, travel patterns and religious assumptions of Victorian England to the modern day.

A splendid biography, which deals justly and fairly with all the controversies of Gladstone's life ... It is a notable achievement and will not be easily superseded. * The Times *
Roy Jenkins has written many good books. This is his best. It is beyond praise. -- Vernon Bogdanor * Evening Standard *
Inspired by affection for his tremendous subject, the author has scaled the heights with panache ... [Jenkins's] evident delight in the man and his story carry the reader along as though on the crest of a wave. -- Claire Tomalin * Independent on Sunday *
Jenkins is a master of irony ... This helps to make the book enormous fun to read, while it is also enlightening in any number of ways. -- John Grigg * Sunday Telegraph *
Deliciously spiced with mordant wit, Gladstone can be read for sheer pleasure. But it is the wisdom as well as the wit that ensures this biography will live on. * Guardian *

This biography matches one of Gladstone's own towering performances.

* Sunday Times *
The combination of author and subject makes Roy Jenkins's Gladstone irrestistible ... His biography is all you need to know about Gladstone including the things you never dared ask. * Independent *
Roy Jenkins has written the definitive biography of William Ewart Gladstone, the 'Grand Old Man' of Victorian politics. Jenkins is a consummate biographer ... Gladstone is his chef-d'oeuvre. * Daily Express *
As befits the heroic grandeur of its subject, this is an admirable proportioned and beautifully written book, by turns enthralling, moving and (sometimes) very funny . . . It is the best single volume biography of a Victorian statesman since Robert Blake's like of Disraeli. What higher praise can there be? -- David Cannadine * Observer *

Roy Jenkins was active in British politics for half a century, entering the House of Commons in 1948 and subsequently serving as Minister of Aviation, Home Secretary, and Chancellor of the Exchequer; he was also the President of the European Commission and Chancellor of Oxford University. In 1987 he took his seat in the House of Lords. In addition to his extraordinary political career he was a highly acclaimed historian and biographer. Among his many works, Gladstone (1995) and Churchill (2001) are regarded as his masterpieces. He died in January 2003.

GOR001189858
Gladstone by Roy Jenkins
Roy Jenkins
Used - Very Good
Paperback
Pan Macmillan
2002-09-06
720
0330411713
9780330411714
Winner of Whitbread Biography Award 1996 (UK)
Book picture is for illustrative purposes only, actual binding, cover or edition may vary.
This is a used book - there is no escaping the fact it has been read by someone else and it will show signs of wear and previous use. Overall we expect it to be in very good condition, but if you are not entirely satisfied please get in touch with us.