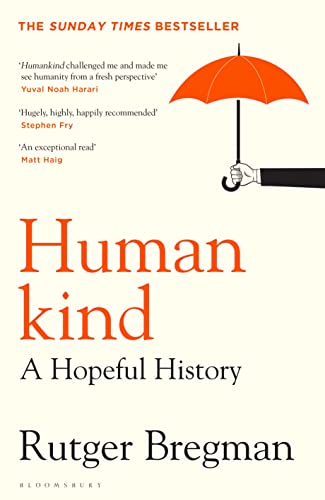 THE SUNDAY TIMES BESTSELLER 'If you only read one book this year, make it this one' CATHY RENTZENBRINK 'This book must be read by as many people as possible - only when people change their view of human nature will they begin to believe in the possibility of building a better world' GRACE BLAKELEY 'It'd be no surprise if it proved to be the Sapiens of 2020' GUARDIAN It's a belief that unites the left and right, psychologists and philosophers, writers and historians. It drives the headlines that surround us and the laws that touch our lives. From Machiavelli to Hobbes, Freud to Dawkins, the roots of this belief have sunk deep into Western thought. Human beings, we're taught, are by nature selfish and governed by self-interest. Humankind makes a new argument: that it is realistic, as well as revolutionary, to assume that people are good. The instinct to cooperate rather than compete, trust rather than distrust, has an evolutionary basis going right back to the beginning of Homo sapiens. By thinking the worst of others, we bring out the worst in our politics and economics too. In this major book, internationally bestselling author Rutger Bregman takes some of the world's most famous studies and events and reframes them, providing a new perspective on the last 200,000 years of human history. From the real-life Lord of the Flies to the Blitz, a Siberian fox farm to an infamous New York murder, Stanley Milgram's Yale shock machine to the Stanford prison experiment, Bregman shows how believing in human kindness and altruism can be a new way to think - and act as the foundation for achieving true change in our society. It is time for a new view of human nature.

An optimistic historian sifts through the past in his mission to prove that mankind might not be so bad . . . A superb read - brisk, accessible and full of great stories * Sunday Times *
This is the book we need right now . . . Entertaining, uplifting . . . If Bregman is right, this book might just make the world a kinder place * Telegraph *
Here, we visit the blitz, Lord of the Flies - both the novel and a very different real-life version - a Siberian fox farm, an infamous New York murder and a host of discredited psychological studies . . . There's a great deal of reassuring human decency to be taken from this bold and thought-provoking book . . . It makes a welcome change to read such a sustained and enjoyable tribute to our better natures * Observer *
Filled with compelling tales of human goodness . . . Bregman's book is a thrilling read and it represents a necessary correction * The Times *
Humankind displays [Bregman's] gift for synthesising libraries full of academic research into spellbinding reads. I whizzed through Humankind's 480 pages, engrossed * Financial Times *
The notion that we already have the capacity to radically improve the world is both an exhilarating and a daunting one * New Statesman *
Bregman argues convincingly that what we teach and report about ourselves, we become . . . Bold, entertaining and uplifting * Spectator *
Bregman's book is something of a beacon at the moment, when many are looking for values to profess in our traumatised and altered society . . . People have started to talk about this book: perhaps the moment of this entirely positive, heartening message is about to come -- Alexander McCall Smith * Scotsman *
Lively and illuminating . . . Even a few months ago, [the idea that most people behave well in most circumstances] might have seemed, as Bregman claims, "a radical idea". The coronavirus crisis has made it blindingly obvious * Irish Times *
One of the most powerful books I have read for a long time, and a book I have absolutely no hesitation about saying everyone needs to read, and that it will change your life if you do so -- Matthew Taylor, RSA
Rutger Bregman's extraordinary new book is a revelation . . . Humankind is masterful in its grasp of history, both ancient and modern -- Susan Cain, author of 'Quiet'
Cynicism is a theory of everything, but, as Rutger Bregman brilliantly shows, an elective one. This necessary book widens the aperture of possibility for a better future, and radically -- David Wallace-Wells, author of 'The Uninhabitable Earth'
This important book is almost preternatural in its timing and argument. Rutger Bregman is poetic in his rejection of a Hobbesian view of our true natures. The gigantic upheavals of 2020 have proved him right. Reading this during lockdown changed the way I think about our humanity. We are good -- Dan Snow
Rutger Bregman is out on his own, thinking for himself, using history to give the rest of us a chance to build a much better future than we can presently imagine -- Timothy Snyder, Holocaust historian and author of 'On Tyranny'
A devastating demolition of the misanthrope's mantra. A beacon of hope for a frighted world -- Professor Danny Dorling, author of 'Inequality and the 1%'

Rutger Bregman, a historian and writer at the Correspondent, is one of Europe's most prominent young thinkers. His last book, Utopia for Realists, was a Sunday Times and New York Times bestseller and has been translated into thirty-two languages. He lives in Holland. @rcbregman | rutgerbregman.com

GOR010602996
Humankind: A Hopeful History by Rutger Bregman
Rutger Bregman
Used - Like New
Hardback
Bloomsbury Publishing PLC
2020-05-19
496
1408898934
9781408898932
N/A
Book picture is for illustrative purposes only, actual binding, cover or edition may vary.
The book has been read, but looks new. The book cover has no visible wear, and the dust jacket is included if applicable. No missing or damaged pages, no tears, possible very minimal creasing, no underlining or highlighting of text, and no writing in the margins.