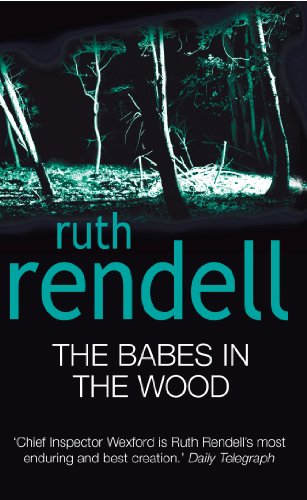 The Babes In The Wood
by Ruth Rendell

In Stock
£3.99
The nineteenth book to feature the classic crime-solving detective, Chief Inspector Wexford. Even where Wexford lives, higher up in Kingsmarkham, the waters had nearly reached the mulberry tree in his once immaculate garden.
Very Good
9 in stock

The Babes In The Wood Summary

The Babes In The Wood: (A Wexford Case) by Ruth Rendell

The nineteenth book to feature the classic crime-solving detective, Chief Inspector Wexford. 'A woman phoned to say she and her husband went to Paris for the weekend, leaving their children with a - well, teen-sitter, I suppose, got back last night to find the lot gone and naturally she assumes they've all drowned.' There hadn't been anything like this kind of rain in living memory. The River Brede had burst its banks, and not a single house in the valley had escaped flooding. Even where Wexford lives, higher up in Kingsmarkham, the waters had nearly reached the mulberry tree in his once immaculate garden. The Subaqua Task Force could find no trace of Giles and Sophie Dade, let alone the woman who was keeping them company, Joanna Troy. But Mrs Dade is convinced her children are dead. As he embarks upon this mysterious investigation, Wexford is forced to question many of his core assumptions about society, even about his own family...

The Babes In The Wood Reviews

"Chief Inspector Wexford is Rendell's most enduring and best creation" * Daily Telegraph *
"As usual, Rendell mirrors aspects of the case in the leading characters' personal lives and her cleverly understated writing bathes them and their actions in a glow of reality that sets her writing above that of her many imitators." * Time Out *
"As always with Ruth Rendell's intricately thought-out novels, nothing is as simple as it seems." * Sunday Express *
"Superb plotting and psychological insight make this another Rendell gripper" * Woman & Home *
"Utterly absorbing" * Sunday Telegraph *

GOR000367812
The Babes In The Wood: (A Wexford Case) by Ruth Rendell
Ruth Rendell
Wexford
Used - Very Good
Paperback
Cornerstone
2003-07-01
416
0099435446
9780099435440
N/A
Book picture is for illustrative purposes only, actual binding, cover or edition may vary.
This is a used book - there is no escaping the fact it has been read by someone else and it will show signs of wear and previous use. Overall we expect it to be in very good condition, but if you are not entirely satisfied please get in touch with us.