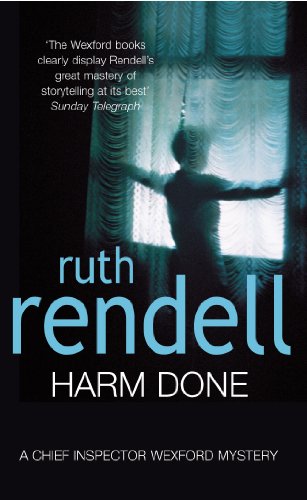 In Stock
£5.99
The eighteenth book to feature the classic crime-solving detective, Chief Inspector Wexford.Chief Inspector Wexford is faced with the effects of violence and prejudice every day as a policeman, and he is also involved with a new programme to help victims of domestic violence.
Very Good Good
Only 4 left

The eighteenth book to feature the classic crime-solving detective, Chief Inspector Wexford. A young girl disappears, then another. A notorious paedophile is released back into the community. The residents of the Muriel Campden Estate are up in arms, and even prepared to take the law into their own hands... Chief Inspector Wexford is faced with the effects of violence and prejudice every day as a policeman, and he is also involved with a new programme to help victims of domestic violence. His daughter, Sylvia, has come to work nearby in a refuge for battered women. Her marriage is not a happy one, although her husband has never raised a hand to her. They are merely incompatible. Other women in Kingsmarkham are not so lucky... Wexford is soon called upon to investigate two extremely serious crimes which will affect the lives and attitudes of police and innocent villagers alike...

"No contemporary writer of suspense stories tries to vary the form's boundaries more than Ruth Rendell" * Guardian *
"The Wexford books clearly display Rendell's great mastery of storytelling at its best" * Sunday Telegraph *
"It is hard to think of another crime writer who so effortlessly incorporates real events [...] into genre fiction, and in a serious manner... Rendell's detective fiction stands almost alone as a chronicle of the dark side of modern life... Rendell offers sufficient clues and red herrings to satisfy the msot dedicated puzzle-solver... Harm Done is a vivid demonstration of Rendell's contribution to contemporary fiction" * Independent *
"One of the greatest novelists presently at work in our language... a writer whose work should be read by anyone who either enjoys a brilliant mystery - or distinguished literature" * Scott Turow *
"More lifelike than many sophisticated thrillers" * Sunday Times *

GOR000366943
Harm Done: (A Wexford Case) by Ruth Rendell
Ruth Rendell
Wexford
Used - Very Good
Paperback
Cornerstone
2000-04-22
480
0099281341
9780099281344
N/A
Book picture is for illustrative purposes only, actual binding, cover or edition may vary.
This is a used book - there is no escaping the fact it has been read by someone else and it will show signs of wear and previous use. Overall we expect it to be in very good condition, but if you are not entirely satisfied please get in touch with us.