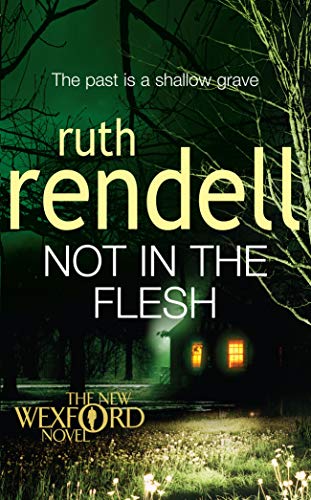 Not in the Flesh
by Ruth Rendell

Out of Stock
The twenty-first book to feature the classic crime-solving detective, Chief Inspector Wexford.The detection skills of Wexford, Burden and the other investigating officers of the Kingsmarkham Police Force are tested to the utmost to discover whether the murders are connected and to track down whoever is responsible.
Very Good New£8.99
Only 0 left

Not in the Flesh Summary

Not in the Flesh: (A Wexford Case) by Ruth Rendell

The twenty-first book to feature the classic crime-solving detective, Chief Inspector Wexford. Searching for truffles in a wood, a man and his dog unearth something slightly less savoury - a human hand. The corpse, as Chief Inspector Wexford is informed later, has lain buried for ten years or so, wrapped in a purple cotton sheet. The post mortem can not reveal the precise cause of death. The only clue to solving this mysterious murder is a crack in one of the dead man's ribs. Wexford knows it will be a difficult job to identify the dead body. Although it covers a relatively short period of time, the police computer stores a long list of missing persons. People disappear at an alarming rate - hundreds each day. And then, only about twenty yards away from the woodland burial site, in the cellar of a disused cottage, another body is found. The detection skills of Wexford, Burden and the other investigating officers of the Kingsmarkham Police Force are tested to the utmost to discover whether the murders are connected and to track down whoever is responsible.

Not in the Flesh Reviews

"Rendell's genius with the whodunnit form works to make everything doubly vital. Without being remotely didactic, she is the pre-eminent thematic novelist of her day . . . Jane Austen would have approved of Rendell's cliche-dissecting wit . . . It's impossible to imagine her writing anything devoid of import. She is one of the rare breed that make you feel privileged to be around at the same time as they are. She doles out death so that we might feel more alive" * New Statesman *
"The queen of the whodunnit returns" * Word *
"Ruth Rendell's books are not only whodunits but whydunits, uncovering the motive roots of murder" * Mail on Sunday *
"Superb ... The suspense persists until the book's final sentences" * Publishers Weekly *
"Gripping and memorable" * Sunday Times *

GOR000380332
Not in the Flesh: (A Wexford Case) by Ruth Rendell
Ruth Rendell
Wexford
Used - Very Good
Paperback
Cornerstone
2008-04-12
384
0099517221
9780099517221
N/A
Book picture is for illustrative purposes only, actual binding, cover or edition may vary.
This is a used book - there is no escaping the fact it has been read by someone else and it will show signs of wear and previous use. Overall we expect it to be in very good condition, but if you are not entirely satisfied please get in touch with us.