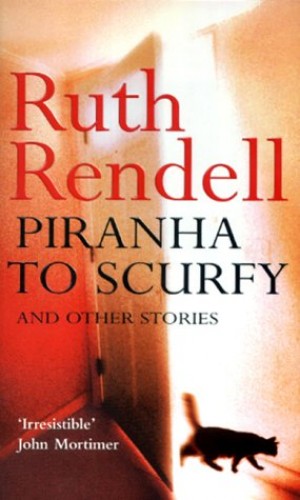 Piranha To Scurfy And Other Stories
by Ruth Rendell

Piranha To Scurfy And Other Stories Summary

Piranha To Scurfy And Other Stories by Ruth Rendell

The long title story is about a man whose life, in a sense, is a book. There are shelves in every room, packed with titles which Ambrose Ribbon has checked pedantically for mistakes of grammar and fact. Life for Ribbon, without his mother now, is lonely and obsessive, filled with psychoses and neuroses, with the ever-present possibility of a descent into violent madness. He still keeps his mother's dressing table exactly as she had left it, the wardrobe door always open so that her clothes can be seen inside, and her pink silk nightdress on the bed. There is one book too that he associates particularly with her - volume VIII of the Encyclopaedia Britannica, Piranha to Scurfy. It marked a very significant moment in their relationship. In the other stories, Ruth Rendell deals with a variety of themes, some macabre, some vengeful, some mysterious, all precisely observed. The second novella, High Mysterious Union, explores a strange, erotic universe in a dream-like corner of rural England, and illustrates very atmospherically what range Ruth Rendell has as a writer, expanding beyond her famous sphere of crime writing.

Piranha To Scurfy And Other Stories Reviews

"Rendell is a great storyteller who knows how to make sure that the reader has to turn the pages out of a desperate need to find out what is going to happen next" -- John Mortimer * Sunday Times *
"Plenty of style and many a wry reflection on the human condition ... Rendell's mission in these well-crafted short stories is ... to exhibit a cool skill in the telling of moral fables. This is serious entertainment" -- Frances Fyfield * Express *
"In her writing, horror does not shake its gory locks directly at us, but hovers on the periphery of our inner vision, hidden among the ordinary, the everyday" -- Jane Shilling * Sunday Telegraph *
"Rendell's mastery of the difficult short story genre is unsurpassed ... Her mesmerising capacity to shock, chill and disturb is unmatched" * The Times *
"Rendell is unrivalled at depicting psychologically warped people and at creating unease through the simplest things. This is another triumph" * Observer *

GOR000517531
Piranha To Scurfy And Other Stories by Ruth Rendell
Ruth Rendell
Used - Very Good
Paperback
Cornerstone
2001-03-31
320
0099414996
9780099414995
N/A
Book picture is for illustrative purposes only, actual binding, cover or edition may vary.
This is a used book - there is no escaping the fact it has been read by someone else and it will show signs of wear and previous use. Overall we expect it to be in very good condition, but if you are not entirely satisfied please get in touch with us.