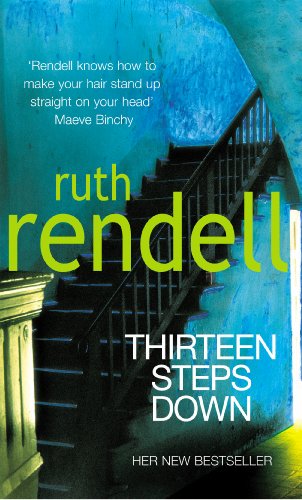 Thirteen Steps Down
by Ruth Rendell

In Stock
£4.49
A classic Rendellian loner, Mix Cellini is superstitious about the number 13. Living in a decaying house in Notting Hill, Mix is obsessed with 10 Rillington Place, where the notorious John Christie committed a series of foul murders. But when reality intrudes into Mix's life, a long pent-up violence explodes.
Very Good
Only 2 left

Thirteen Steps Down by Ruth Rendell

A classic Rendellian loner, Mix Cellini is superstitious about the number 13. Living in a decaying house in Notting Hill, Mix is obsessed with 10 Rillington Place, where the notorious John Christie committed a series of foul murders. He is also infatuated with a beautiful model who lives nearby - a woman who would not look at him twice. Mix's landlady, Gwendolen Chawcer is equally reclusive - living her life through her library of books. Both landlady and lodger are caught up in their own psychologically twisted parallel worlds. But when reality intrudes into Mix's life, a long pent-up violence explodes.

"Ruth Rendell is back to her creepy best." * Daily Mail *
"Rendell's eerie capacity to comprehend disturbed criminal minds continues to astonish." * The Times *
"It's impossible to read the terrors abroad in her shabby streetscapes without total emotional involvement." * Sunday Times *
"One of her darkest and best." * Literary Review *
"If Ruth Rendell were not slotted into the category of writer of mystery novels, she would have won the Booker long ago" * Books of the Year, Evening Standard *

GOR000410194
Thirteen Steps Down by Ruth Rendell
Ruth Rendell
Used - Very Good
Paperback
Cornerstone
2005-03-26
400
0099474328
9780099474326
N/A
Book picture is for illustrative purposes only, actual binding, cover or edition may vary.
This is a used book - there is no escaping the fact it has been read by someone else and it will show signs of wear and previous use. Overall we expect it to be in very good condition, but if you are not entirely satisfied please get in touch with us.