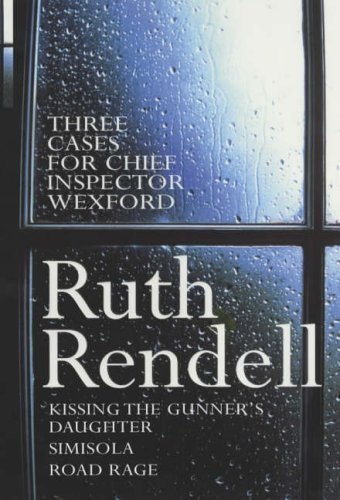 In Stock
£4.99
As a mystery, Simisola is exceptional- pace, surprise, tension and a climax of stunning unexpectedness' The Times ROAD RAGEWhen Wexford's wife goes missing, the detective is in a race against time to solve a murder case, before Dora Wexford is placed in mortal danger...
Very Good Good Well Read
5 in stock

KISSING THE GUNNER'S DAUGHTER A sergeant in the Kingsmarkham police force is tragically killed. Ten months later, Wexford enters a bloodbath of a crime scene, where a family has been brutally murdered. 'Her most brilliant Wexford mystery to date- The plot is complicated and elaborately detailed but, as usual, there is not one superfluous word- stunning imagery' Kate Saunders, Cosmopolitan 'Beyond praise, completely compelling - will delight all Wexford's admirers' Allan Massie, The Scotsman SIMISOLA When a young black woman is murdered, Wexford must overcome his prejudices to allow his investigative skills to succeed... 'Impressive and courageous- Rendell's psychological and social insights are so absorbing, it's easy to forget what a superb plotter she is. As a mystery, Simisola is exceptional- pace, surprise, tension and a climax of stunning unexpectedness' The Times ROAD RAGE When Wexford's wife goes missing, the detective is in a race against time to solve a murder case, before Dora Wexford is placed in mortal danger... 'The book could hardly be more readable- A brilliant evocation of place, character and mood' Evening Standard 'With immaculate control, Ruth Rendell builds a menacing crescendo of tension and horror that keeps you guessing right up to the brilliantly paced finale' Good Housekeeping

"Ruth Rendell has quite simply transformed the genre of crime writing. She deploys her peerless skill in blending the mundane, commonplace aspects of life with the potent, murky impulses of desire and greed, obsession and fear" * Anthony Clare, Sunday Times *
"Not only the finest crime novelist, but one of the finest novelists writing in the English language" * Scotsman *
"Rendell is the absolute mistress of plot" * Mail on Sunday *
"Once her characters start twisting on every-tightening tracks, their fates are brilliantly sealed, and it's never obvious who'll be the victim or the culprit. Rendell's greatest trick is making an unforeseen outcome feel predestined" * Financial Times *
"One of the best-written detective series in the genre's history... At any time we can return to Kingsmarkham to explore the darker side of humanity with Wexford as our reassuring and humane guide" * Washington Post *

GOR001181006
Three Cases For Chief Inspector Wexford by Ruth Rendell
Ruth Rendell
Used - Very Good
Paperback
Cornerstone
2002-06-06
896
0091794471
9780091794477
N/A
Book picture is for illustrative purposes only, actual binding, cover or edition may vary.
This is a used book - there is no escaping the fact it has been read by someone else and it will show signs of wear and previous use. Overall we expect it to be in very good condition, but if you are not entirely satisfied please get in touch with us.