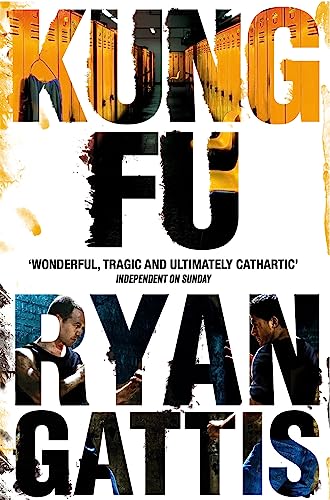 Jen B's been surviving at the nightmarishly brutal MLK High School just like everybody else: by following the rules. She avoids the Principal. She doesn't complain. She's loyal to her MLK 'family'. And, like 99.5% of the student body, she knows one form or another of martial arts.

When Jen's world-famous Kung-Fu champion of a cousin Jimmy Chang turns up, everyone wants a piece of him - including Ridley, resident drug lord and leader of the school's most violent gang. They all want to see the legendary martial-arts master defend himself during the school's merciless initiation ritual.

Except that Jimmy's made a promise never to fight again - a promise that soon leads to the murder of Jen's brother and a bloody final battle that engulfs the entire school.

Fast-paced, gritty and addictive, Kung Fu by Ryan Gattis is an extreme journey into high-school violence and the American Dream that feeds it.

It's so tense that at times you have absolutely no idea what has just happened in the real world because you're in The Fu, entirely. You feel every blow, every break. And what a climax ... I want to tell you all about it so that I can discuss with you how wonderful, tragic and ultimately cathartic it was ... but I won't. You'll just have to keep a strong stomach and see for yourself Independent on Sunday Ryan Gattis's homage to the world of martial arts is a way-cool, direct and stylish romp of fiction that feels very real ... A modern, violent epic of teenage kicks in the school of hard knocks. Kung Fu is a bloodied white-knuckle ride that never forgets the consequences of its actions The List

Ryan Gattis is the author of Kung Fu and All Involved, which won the American Library Association's Alex Award & the Lire Award for Noir of the Year in France. Gattis lives and writes in Los Angeles, where he is a member of the street art crew UGLARworks & a founding board member of 1888, a Southern California literary arts non-profit.

GOR007726989
Kung Fu by Ryan Gattis
Ryan Gattis
Used - Very Good
Paperback
Pan Macmillan
2016-05-19
288
1509813500
9781509813506
N/A
Book picture is for illustrative purposes only, actual binding, cover or edition may vary.
This is a used book - there is no escaping the fact it has been read by someone else and it will show signs of wear and previous use. Overall we expect it to be in very good condition, but if you are not entirely satisfied please get in touch with us.