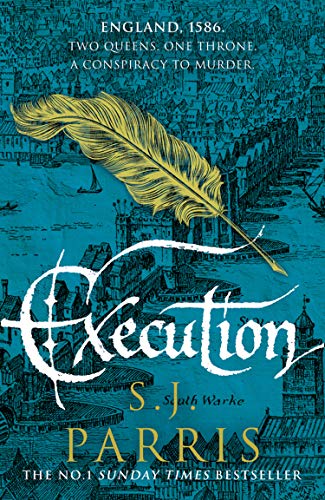 The No. 1 Sunday Times bestselling series, perfect for fans of C. J. Sansom and The Mirror and the Light by Hilary Mantel

The No. 1 Sunday Times bestselling series, perfect for fans of C. J. Sansom and The Mirror and the Light by Hilary Mantel

A TREASONOUS CONSPIRACY
Giordano Bruno, a heretic turned spy, arrives in England with shocking information for spymaster Sir Francis Walsingham. A band of Catholic Englishmen are plotting to kill Queen Elizabeth and spring Mary, Queen of Scots, from prison to take the English throne in her place.

A DEADLY TRAP
Bruno is surprised to find that Walsingham is aware of the plot and is allowing it to progress. He hopes that Mary will put her support in writing - and condemn herself to a traitor's death.

A QUEEN IN MORTAL DANGER
Bruno is tasked with going undercover to join the conspirators. Can he stop them before he is exposed? Either way a queen will die; Bruno must make sure it is the right one...

'A delicious blend of history and thriller' The Times

'Colourful characters, fast-moving plots and a world where one false step in religion or politics can mean a grisly death' Sunday Times

'Twists and turns like a corkscrew of venomous snakes' Stuart MacBride

'It has everything - intrigue, mystery and excellent history' Kate Mosse

'A brilliantly realised fictionalisation of the Babington plot against Elizabeth 1...Nimbly braiding history with suspense, this is a classy mystery' Observer

'Parris's attention to the details of Elizabethan life and her ability to create characters of depth are again on display in a gripping narrative.' The Sunday Times

'Parris takes us to the heart of the Elizabethan court, a world of secrets and lies. Superbly plotted, shimmeringly written, it will have you on the edge of your seat and take you into an underground world of do or die - where a man's life is as nothing and everyone is a gambler in a game of queens' Kate Williams, author of The Storms of War

'An impressive feat. The plot, one of exhilarating complexity, was handled with aplomb' 'Marisa Haetzman, also writes as Ambrose Parry

'A delicious blend of history and thriller' The Times

'A tight plot combines with subtly-realised characters and an omnipresent sense of danger ... My pleasure in the vividly textured backdrop and a cracking story was accompanied by an uneasy shudder' Daily Mail

'Colourful characters, fast-moving plots and a world where one false step in religion or politics can mean a grisly death' Sunday Times

'S. J. Parris is one of my favourite authors - and unquestionably our greatest living writer of historical thrillers' A.J. Finn

'Successful historical thrillers need three elements: a killer plot that weaves seamlessly into the history; an engaging protagonist; and an atmospheric sense of place. Parris nails all three' The Times

'Pacy, intricate, and thrilling... Full of historical detail and rich with atmosphere' Observer

'I can thoroughly recommend Conspiracy, which twists and turns like a corkscrew of venomous snakes' Stuart MacBride

'Parris's Giordano Bruno series has been a joy' Sunday Telegraph

No. 1 Sunday Times bestseller S. J. Parris is the pseudonym of the author and journalist Stephanie Merritt. It was as a student at Cambridge researching a paper on the period that Stephanie first became fascinated by the rich history of Tudor England and Renaissance Europe. Since then, her interest has grown and led her to create this series of historical thrillers featuring Giordano Bruno.

Stephanie has worked as a critic and feature writer for a variety of newspapers and magazines, as well as radio and television. She has also written the contemporary psychological thriller While You Sleep under her own name. She currently writes for the Observer and the Guardian, and lives in Surrey with her son.

GOR010554802
9780007481293
0007481292
Execution (Giordano Bruno, Book 6) by S. J. Parris
S. J. Parris
Giordano Bruno
Used - Very Good
Hardback
HarperCollins Publishers
2020-07-09
496
N/A
Book picture is for illustrative purposes only, actual binding, cover or edition may vary.
This is a used book - there is no escaping the fact it has been read by someone else and it will show signs of wear and previous use. Overall we expect it to be in very good condition, but if you are not entirely satisfied please get in touch with us
Trustpilot