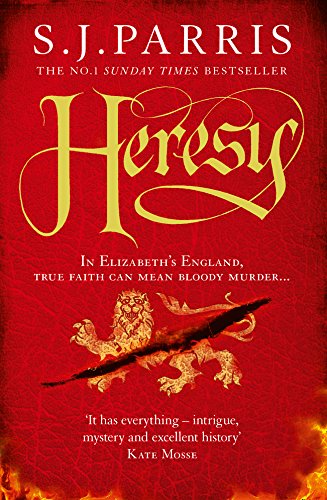 A vivid and gripping historical thriller set in Elizabethan England introducing Giordano Bruno, philosopher, scientist and spy for all fans of C.J.Sansom and The Name of the Rose.

A vivid and gripping historical thriller set in Elizabethan England introducing Giordano Bruno, philosopher, scientist and spy for all fans of C.J.Sansom and The Name of the Rose.

Oxford, 1583. A place of learning. And murderous schemes.

The country is rife with plots to assassinate Queen Elizabeth and return the realm to the Catholic faith. Giordano Bruno is recruited by the queen's spymaster and sent undercover to expose a treacherous conspiracy in Oxford - but his own secret mission must remain hidden at all costs.

A spy under orders. A coveted throne under threat.

When a series of hideous murders ruptures close-knit college life, Bruno is compelled to investigate. And what he finds makes it brutally clear that the Tudor throne itself is at stake...

Heretic, maverick, charmer: Giordano Bruno is always on his guard. Never more so than when working for Queen Elizabeth and her spymaster - for this man of letters is now an agent of intrigue and danger.

`Heresy has everything - intrigue, mystery, excellent history and haunting sense of place. The beginning of a wonderful new detective series' Kate Mosse

`Fascinating ... The period is incredibly vivid and the story utterly gripping' Conn Iggulden (bestselling author of Bones of the Hills and The Dangerous Book for Boys)

`Heresy is a riveting read. Rich in both historical detail and ingenious twists, S J Parris has created a character in Giordano Bruno that will endure. A true rival to C J Sansom' Sam Bourne (bestselling author of The Righteous Men)

`Heresy is a must-read for every fan of historical thrillers. S. J. Parris transports the reader back to an extraordinary time in history by mobilizing fascinating details, suspense, and fully-drawn characters. Giordano Bruno turns out to be that rare hero, charismatic and nuanced enough to impel an encore, and to leave us asking for more from the gifted Parris' Matthew Pearl (author of The Dante Club)

'The places and people are vividly described with a merciful absence of period language, and the solution to this exciting, well-written tale comes as a real surprise' Literary Review

No. 1 Sunday Times bestseller S. J. Parris is the pseudonym of the author and journalist Stephanie Merritt. It was as a student at Cambridge researching a paper on the period that Stephanie first became fascinated by the rich history of Tudor England and Renaissance Europe. Since then, her interest has grown and led her to create this series of historical thrillers featuring Giordano Bruno.

Stephanie has worked as a critic and feature writer for a variety of newspapers and magazines, as well as radio and television. She currently writes for the Observer and the Guardian, and lives in Surrey with her son.

GOR002509445
Heresy (Giordano Bruno, Book 1) by S. J. Parris
S. J. Parris
Giordano Bruno
Used - Very Good
Paperback
HarperCollins Publishers
2011-03-03
512
0007317700
9780007317707
Short-listed for CWA Ellis Peters Historical Award 2010
Book picture is for illustrative purposes only, actual binding, cover or edition may vary.
This is a used book - there is no escaping the fact it has been read by someone else and it will show signs of wear and previous use. Overall we expect it to be in very good condition, but if you are not entirely satisfied please get in touch with us.