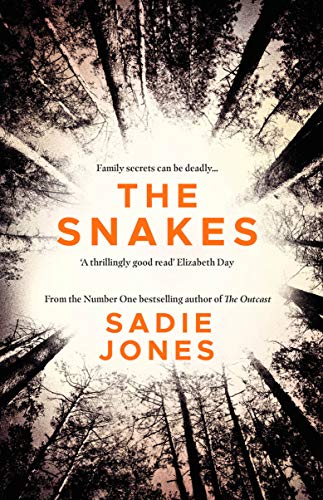 The Snakes
by Sadie Jones

READ THE TENSE TWIST-FILLED RICHARD AND JUDY BOOK CLUB PICK FOR SPRING 2020 FROM THE #1 BESTSELLING AUTHOR OF THE OUTCAST.

Family secrets can be deadly...

READ THE TENSE TWIST-FILLED RICHARD AND JUDY BOOK CLUB PICK FOR SPRING 2020 FROM THE #1 BESTSELLING AUTHOR OF THE OUTCAST.

Family secrets can be deadly...

Newly-weds Dan and Bea decide to escape London. Driving through France in their beaten-up car they anticipate a long lazy summer, worlds away from their ordinary lives.

But their idyll cannot last. Stopping off to see Bea's brother at his crumbling hotel, the trio are joined unexpectedly by Bea's ultra-wealthy parents. Dan has never understood Bea's deep discomfort around them but living together in such close proximity he begins to sense something is very wrong.

Just as tensions reach breaking point, brutal tragedy strikes, exposing decades of secrets and silence that threaten to destroy them all.

'A suspenseful, beautifully written thriller about the corruption of money and abuse within a dysfunctional family' Guardian

Sadie Jones is such an enjoyable novelist to spend time with. Her books are so easy to read, while each sentence is rich in meaty observation... Elegantly atmospheric... The Snakes left me breathless -- Claire Allfree * Daily Mail *
The Snakes is superbly written, each sentence punctuated by a drumbeat of menace, each word placed with a master's touch. I keep thinking about the questions it poses: about what it is to be good in these imperfect times; about how we can protect our humanity in the face of narcissism and greed. Yet for all its depth and mystery, The Snakes is also just a thrillingly good read -- Elizabeth Day
The Snakes asks serious questions about human nature, avarice and justice, wrapped in the fast-paced rhythms of a thriller. It is written with Jones's trademark economy and a fierce attention to the nuances of familial cruelty... I finished The Snakes with a juddering heart, strangely close to tears -- Elizabeth Lowry * Guardian *
The Snakes is gripping from the outset, then finally unputdownable. The writing is magnificent. One of the most powerful and uncompromising novels I've read in years. -- Jonathan Coe
Ever since her debut, The Outcast, Jones has peopled her propulsive plots with nuanced, dimensional creations imbued with human failings and graces. The Snakes is no exception... Jones crafts a pitiless shock ending; a denouement that refuses closure and resonates long after the book is set aside... [the ending is] bound to become a talking point -- Suzi Feay * Financial Times *
I am blowing the trumpet for The Snakes to anyone who'll listen. I devoured the book, awed by its beauty and brilliance. We'll be lucky if 2019 brings us much else of this rank. This is wickedly good writing and something really special. Sadie Jones has talent to burn. -- Billy O'Callaghan
A suspenseful, beautifully written thriller about the corruption of money and abuse within a dysfunctional family * Guardian *
Masterful, terrifying, dangerous, with an ending that is as uncompromising as the build-up is truthful. The Snakes is as beautifully written as it is dark and honest. -- Rachel Joyce
A menacing, beautifully written novel * Guardian, *Summer Reads of 2019* *
I was absolutely gripped by this original and beautifully-told story of a couple enmeshed in a nest of vipers -- a rich family of criminals. Its evocation of a sinister French house, the corruption of love and the powerlessness of good is both haunting and chilling. Nobody contemporary writes about unhappy families as well as Sadie Jones. -- Amanda Craig
This gripping read drips with a menace that builds of the shocking final pages -- Joanne Finney * Good Housekeeping, *Book of the Month* *
[A] menacing new contemporary thriller... a tantalising set-up, after which the plot zigzags unpredictably to a brutally stark finale that steals the breath -- Anthony Cummins * Metro *
The Snakes has all of Jones's trademark depth and layered storytelling -- Sarra Manning * Red *
Sadie Jones... knows how to construct a narrative of great emotional power. Her prose is crisp and precise, studded with spiky observations -- Andrew Taylor * Spectator *
An all-encompassing read from the first page to the devastating final paragraph -- Alice O'Keeffe * The Bookseller *
The ending is devastating -- Jeffrey Burke * Mail on Sunday *
Unsettling, thought-provoking and beautifully written, you won't be able to get this out of your head -- Caroline Robb * Heat *
Jones's style is immediate and lively and she is particularly good at dialogue, which she uses a great deal, often to advance the fast-paced plot -- Elisa Seagrave * Literary Review *
The Snakes unfolds in clean, functional prose and Jones has a lot to say about the way we live now -- Johanna Thomas-Corr * Evening Standard *
Determined to escape the nine-to-five monotony, Bea and Dan head to France to visit Bea's wayward brother Alex, who runs a hotel where the only guests are snakes in the attic. The peace is shattered when Bea's parents arrive, bringingconflict and misery. From a sedate start, Jones deftly builds the tension to a horrific and powerful conclusion. * The Telegraph *
Jones's fifth novel is a fantastic read as a thriller, but where Jones excels, is in her microscopic yet compassionate scrutiny of relationships: the unconditional doting of a flawed sibling; the sickening toxicity of a vicious but powerful parent; the watchful care and explosions of irritation between spouses -- Maria Crawford * Financial Times, *Summer Reads of 2019* *
Deliciously wicked... the perfect antidote to a relaxing summer's day... hypnotic -- like staring into the serpent's eyes just before it strikes -- Ron Charles * Washington Post *
Both a cautionary tale and a pitch-black race-to-the-end thriller -- Justine Jordon * Guardian, *Books of the Year* *
Sadie Jones is a talented writer. She is able to burrow down into the heart of feelings and yet does so in a matter of fact way. The ending shocked me... [The Snakes is] the sort of read I could spend ages thinking about what lies beneath the story of greed, wealth, jealousy and flawed family relationships -- Nicola Smith * NB *

Sadie Jones is a novelist and screenwriter. Her first novel, The Outcast ('Devastatingly good', Daily Mail) won the Costa First Novel Award in 2008 and was shortlisted for the Orange Prize. It was also a Richard and Judy Summer Reads number one bestseller and adapted for BBC Television. Her second novel, Small Wars ('Outstanding', The Times; 'One of the best books about the English at war ever', Joel Morris), was published in 2009, and longlisted for the Orange Prize. Her third, in 2012, was The Uninvited Guests ('A shimmering comedy of manners and disturbing commentary on class... a brilliant novel', Ann Patchett) followed by Fallout in 2014 ('Intoxicating and immersive', The Sunday Times).

GOR010341581
The Snakes: The gripping Richard & Judy 2020 Bookclub pick by Sadie Jones
Sadie Jones
Used - Very Good
Paperback
Vintage Publishing
2020-02-20
448
1784708828
9781784708825
N/A
Book picture is for illustrative purposes only, actual binding, cover or edition may vary.
This is a used book - there is no escaping the fact it has been read by someone else and it will show signs of wear and previous use. Overall we expect it to be in very good condition, but if you are not entirely satisfied please get in touch with us.