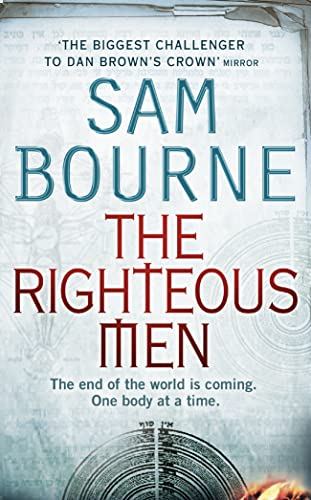 The Righteous Men
by Sam Bourne

The Number One bestseller. A religious conspiracy thriller like no other. The end of the world is coming - one body at a time...

The Righteous Men by Sam Bourne

The Number One bestseller. A religious conspiracy thriller like no other. The end of the world is coming - one body at a time...

Two murders at opposite ends of America, one in the backstreets of New York City, the other in the backwoods of Montana. A series of killings in every corner of the globe, from the crowded slums of India to the pristine beaches of Cape Town. There can't possibly be a connection.

That's the instinct of Will Monroe, a young, British-born reporter for The New York Times - until the morning his beautiful wife Beth is kidnapped. Holding her are men who seem ready to kill without hesitation.

Desperate, Will follows a trail that leads to a mysterious sect right on his own doorstep - fervent followers of one of mankind's oldest faiths. He will have to break through multiple layers of mysticism and ancient prophecy, unearthing riddles buried deep in the Bible - until he finds the secret that is said to have animated the world for thousands of years, a secret on which the fate of humanity may depend. But with more murders by the hour, and each clue wrapped in layers of code, time is running out...

`Compulsive reading ... successfully blends ancient teachings with the highly charged ways of the 21st century ... bears all the hallmarks of a blockbuster' Daily Express

`A turbocharged thriller' In Style

`Will be compared, inevitably, to The Da Vinci Code. The similarities are difficult to ignore, but it's far better written ... will thrill any conspiracy-theory fans ... a highly enjoyable read' Psychologies

Sam Bourne is a pseudonym for Jonathan Freedland, an award-winning journalist and broadcaster. He writes a weekly column in the Guardian, as well as a monthly piece for the Jewish Chronicle. He also presents BBC Radio 4's contemporary history series, The Long View. In the annual What the Papers Say awards of 2002 Jonathan Freedland was named Columnist of the Year and praised for his incisive, original, strong and very outspoken views. He lives in London with his wife and their two children. `The Righteous Men' is his first novel.

GOR010504802
The Righteous Men by Sam Bourne
Sam Bourne
Used - Like New
Paperback
HarperCollins Publishers
2006-06-19
576
0007203306
9780007203307
Short-listed for British Book Awards: Crime Thriller of the Year 2007
Book picture is for illustrative purposes only, actual binding, cover or edition may vary.
The book has been read, but looks new. The book cover has no visible wear, and the dust jacket is included if applicable. No missing or damaged pages, no tears, possible very minimal creasing, no underlining or highlighting of text, and no writing in the margins.