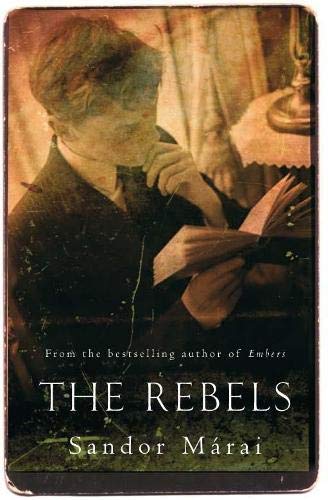 The Rebels
by Sandor Marai

In Stock
£3.29
From the author of the bestselling Embers, a haunting, powerful tale of innocence threatened by war
Very Good
Only 2 left

The Rebels by Sandor Marai

It is May 1918, war is sweeping Europe, and a group of boys await graduation in their near-deserted town. Drawn close by an unspoken fear of leaving home to fight, they retreat into a clandestine world of codes, hideaways and fierce invention - until one day a stranger enters their lives and their secret is exposed.

From the great Hungarian author of Embers, The Rebels is the story of a final, precious summer: a haunting novel of youthful exuberance burning in the face of irrevocable change.

`Elegant, languid and almost subversive. To read it is an experience that leaves one fully alert'

`Delicate brilliance . . . perfect and unforgettable detail, like a landscape in the last moments before darkness falls'

"A darkly comic, war-ravaged coming-of-age tale that displays much of the genius visible in his later works, but [is] also funnier and more extravagantly imaginative." --"The New Yorker" "The emotional power of the story is that of a simple, straightforward narrative . . . followed by stunning revelation." --"The Boston Globe" "A morbidly comic novel . . . marked by passages of bleak elegiac grandeur." --"The New York Sun"

GOR001010232
The Rebels by Sandor Marai
Sandor Marai
Used - Very Good
Paperback
Pan Macmillan
2008-11-07
288
0330454552
9780330454551
N/A
Book picture is for illustrative purposes only, actual binding, cover or edition may vary.
This is a used book - there is no escaping the fact it has been read by someone else and it will show signs of wear and previous use. Overall we expect it to be in very good condition, but if you are not entirely satisfied please get in touch with us.