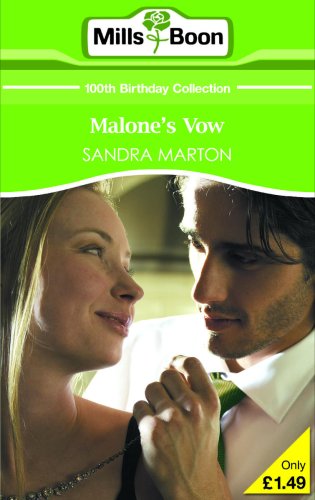 When Jessie runs away from her wedding, it's because she's fallen for the best man, Liam Malone!

But Jessie doesn't know he's the corporate raider who's taken over the company she works for. Or that finding the errant bride has become Malone's vow...

Sandra Marton, a best-selling American author, wrote her first novel when she was seven. It was a romance, which probably says a lot about fate and the mysterious paths that sometimes lead us through life. By the time she was ten, she'd read Gone With The Wind even though that famous scene where Rhett carries Scarlett up the stairs puzzled the heck out of her. / Sandra loved school, hated gym, and graduated high school at 15 1/2. More important, she fell head over heels in love that same year and finally figured out what that scene in Gone With The Wind was all about. / At university, Sandra studied Creative Writing. She also studied to be an elementary school teacher because everyone knew you couldn't possibly earn your living as a writer. Life got very busy. Sandra married the boy she'd met at 15 1/2, began teaching, became a mom, stopped teaching, took in every stray cat and dog she found and eventually ran for public office and won, but she never forgot she had once dreamed of being a writer. In what little spare time she had, she wrote poems and short stories. The poems were dark and murky. The short stories were dark but not quite as murky. She even sold some of them but she knew she hadn't yet found the kind of stories she really wanted to write. / And then, one day, she thought, I wonder if I could write a romance novel... / So she wrote one and sent it into the world where it was rejected in some places and given encouragement in others until her husband, that boy she'd fallen crazy in love with so many years before, took matters into his own hands and mailed her book to Harlequin Presents. / Seventy-five plus books later, he still loves to remind her of that.

GOR001177876
Malone's Vow by Sandra Marton
Sandra Marton
Used - Very Good
Paperback
HarperCollins Publishers
2008-09-01
112
0263866440
9780263866445
N/A
Book picture is for illustrative purposes only, actual binding, cover or edition may vary.
This is a used book - there is no escaping the fact it has been read by someone else and it will show signs of wear and previous use. Overall we expect it to be in very good condition, but if you are not entirely satisfied please get in touch with us.