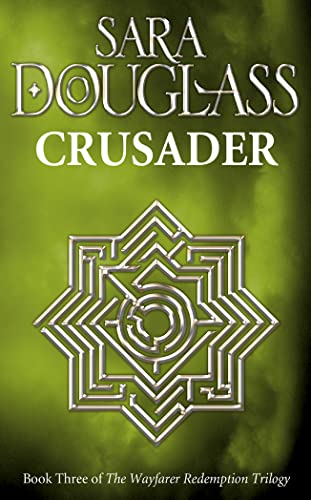 The last book of the Wayfarerer Redemption, an enthralling continuation of The Axis trilogy, by the bestselling Australian author Sara Douglass

The last book of the Wayfarerer Redemption, an enthralling continuation of The Axis trilogy, by the bestselling Australian author Sara Douglass

The protecting magical forests of Minstrelsea have been blasted from the surface of Tencendor, leaving demons and Hawkchildren free to feed. At the Maze, Queteb stands victorious over the body of Caelum SunSoar yet boiling with anger that the true Enemy Reborn, the Starson, has escaped destruction. With his unholy army of demon-corrupted men and beasts around him Queteb begins the search for the only man who can now defeat him.

Bound to the temporary safety of the cave of Sanctuary, the survivors of Tencendor mourn the loss of Caelum and struggle to come to terms with the traitorous Drago's true identity. Now, as DragonStar the StarSon, Drago must prepare the unwilling Tencendorians for Queteb's onslaught.

But treachery from within the SunSoar family itself threatens to undermine Drago's new-found powers and will prove fatally decisive in the final battle for Tencendor.

GOR001218648
Crusader by Sara Douglass
Sara Douglass
Used - Very Good
Paperback
HarperCollins Publishers
2000-12-01
608
0006486193
9780006486190
N/A
Book picture is for illustrative purposes only, actual binding, cover or edition may vary.
This is a used book - there is no escaping the fact it has been read by someone else and it will show signs of wear and previous use. Overall we expect it to be in very good condition, but if you are not entirely satisfied please get in touch with us.