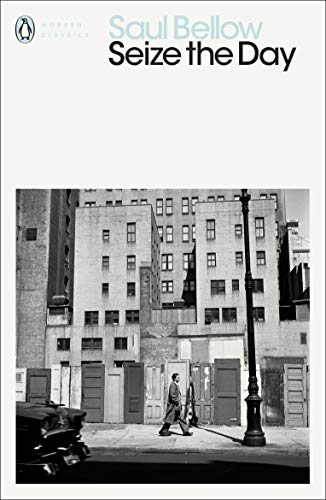 Seize the Day
by Saul Bellow

In Stock
£5.99
Fading charmer, Tommy Wilhelm has reached his day of reckoning and is scared. In his forties, he still retains a boyish impetuousness that has brought him to the brink of chaos: he is separated from his wife and children, at odds with his vain, successful father, failed in his acting career, and in a financial mess.
Very Good Good Well Read
14 in stock

Seize the Day by Saul Bellow

Fading charmer Tommy Wilhelm has reached his day of reckoning and is scared. In his forties, he still retains a boyish impetuousness that has brought him to the brink of chaos: he is separated from his wife and children, at odds with his vain, successful father, failed in his acting career (a Hollywood agent once placed him as 'the type that loses the girl') and in a financial mess. In the course of one climactic day he reviews his past mistakes and spiritual malaise, until a mysterious, philosophizing con man grants him a glorious, illuminating moment of truth and understanding, and offers him one last hope ...

A profoundly true image of human existence . . . This is the intense world of the ordinary, about to burst forth into the radiance of consciousness * The New York Times *
What makes all of this so remarkable is not merely Bellow's eye and ear for vital detail. Nor is it his talent for exposing the innards of character in a paragraph, a sentence, a phrase. It is Bellow's vision, his uncanny ability to seize the moment and to see beyond it * Chicago Times *
A small masterpiece...I enjoy Saul Bellow in his spreading carnivals and wonder at his energy -- V.S. Pritchett
Bellow's pre-eminence rests not on sales figures and honorary degrees, not on rosettes and sashes, but on incontestable legitimacy. To hold otherwise is to waste your breath. Bellow sees more than we see - sees, hears, smells, tastes, touches... Bellow will emerge as the supreme American novelist. The only American who gives Bellow any serious trouble is Henry James -- Martin Amis
Saul Bellow was a brilliant man, a master of English prose and supreme chronicler of modernity and its torments. -- Ian McEwan
It is the special distinction of Mr. Bellow as a novelist that he is able to give us, step by step, the world we really live each day -- and in the same movement to show us that the real suffering of not understanding, the deprivation of light. It is this double gift that explains the unusual contribution he is making to our fiction * The New York Times *
Saul Bellow was the American writer supreme . . . our most exuberant and melodious postwar novelist -- John Updike

Saul Bellow's dazzling career as a novelist was celebrated during his lifetime with an unprecedented array of literary prizes and awards, including the Pulitzer Prize, three National Book Awards, and the Gold Medal for the Novel. In 1976 he was awarded a Nobel Prize 'for the human understanding and subtle analysis of contemporary culture that are combined in his work'.

Bellow's death in 2005 was met with tribute from writers and critics around the world, including James Wood, who praised 'the beauty of this writing, its music, its high lyricism, its firm but luxurious pleasure in language itself'.

GOR001210810
Seize the Day by Saul Bellow
Saul Bellow
Penguin Modern Classics
Used - Very Good
Paperback
Penguin Books Ltd
2001-04-26
144
014118485X
9780141184852
N/A
Book picture is for illustrative purposes only, actual binding, cover or edition may vary.
This is a used book - there is no escaping the fact it has been read by someone else and it will show signs of wear and previous use. Overall we expect it to be in very good condition, but if you are not entirely satisfied please get in touch with us.