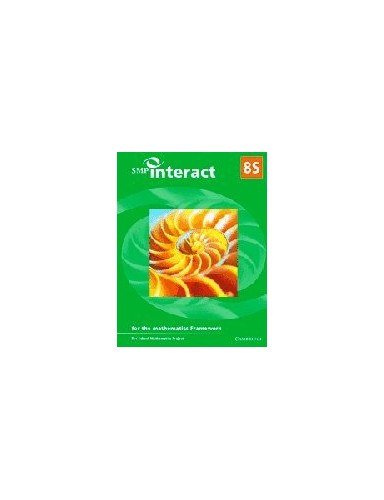 SMP Interact: Framework Edition supports a teacher-led, discussion-based approach as the framework promotes. With three differentiated tiers providing coherance and clear progression it has been extensively trialled to ensure effectiveness and excellent value. The series comprises pupils' books: with one book per year and carefully graduated and supportive texts have clear explanations and layout. Teacher's guides: Chapter-by-chapter advice on activities and discussion that throw light on misconceptions and build understanding. Optional practice booklets: linked to each pupils' book with the same structure.

'Since we started using SMP Interact in 2000, we have seen an increase in our results for the end of Key Stage tests. Students schieving Level 5 and above has risen from 67% in 2000 to 72% in 2002, and students achieving Level 6 and above has risen from 36% to 41% over the same period. We are very pleased.' Head of Maths, Oulder Hill Community School, Rochdale
'The scheme has had a major effect on teaching and learning in the early years and has helped with the simultaneous introduction of the National Numeracy Strategy.' Head of Maths, King Edward VII School, Sheffield.
'With SMP Interact's support, our performance in the value-added tables has been above average, and pupils are even scoring level 8 in the end of Key Stage tests for the first time in the school's history.' Head of Maths, Charles Burrell High School, Norfolk
'These are thoughtfully written, imaginative texts, which maintain a rigourous approach and which are enjoyable for both students and staff.' Head of Maths, Stratford Girls Grammar School, Stratford upon Avon
'The objectives at the start of each section are good and there are loads of interesting activities. The 'What progress have you made?' is really good and there are lots of pictures and diagrams which make you want to read it.' TES

GOR001081661
SMP Interact Book 8S: for the Mathematics Framework by School Mathematics Project
School Mathematics Project
SMP Interact for the Framework
Used - Very Good
Paperback
Cambridge University Press
2003-05-22
232
0521538041
9780521538046
N/A
Book picture is for illustrative purposes only, actual binding, cover or edition may vary.
This is a used book - there is no escaping the fact it has been read by someone else and it will show signs of wear and previous use. Overall we expect it to be in very good condition, but if you are not entirely satisfied please get in touch with us.