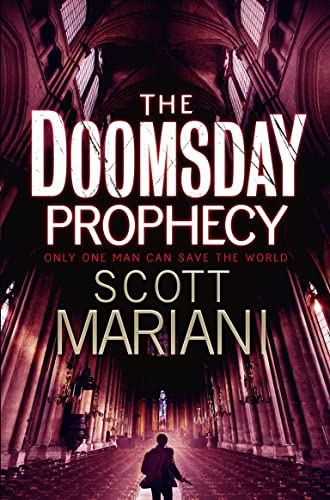 The Doomsday Prophecy
by Scott Mariani

FROM THE #1 BESTSELLING AUTHOR

When ex-SAS operative Ben Hope decided to give up rescuing kidnap victims in favour of the Theology studies he abandoned years before, he should have known that fate would decide differently.

Searching for missing biblical archaeologist Zoe Bradbury, Ben finds himself embroiled in his riskiest mission yet. What is the ancient secret that Zoe uncovered? And just who is willing to do anything to protect it?

The investigation leads Ben from Greece to the American Deep South and the holy city of Jerusalem, and he soon discovers that it's not just his and Zoe's lives on the line, but those of millions, threatened by a fundamentalist plot to gain ultimate power. The stakes are terrifyingly high as Ben races to prevent a disaster that could kick-start apocalyptic events as foretold by the Book of Revelation...

The Ben Hope series is a must-read for fans of Dan Brown, Lee Child and Mark Dawson. Join the millions of readers who get breathless with anticipation when the countdown to a new Ben Hope thriller begins...

Whilst the Ben Hope thrillers can be read in any order, this is the third book in the series.

`Fans of Dan Brown will love this thrilling adventure' Closer

`If you've got a pulse, you'll love Scott Mariani; if you haven't, then maybe you crossed Ben Hope' Simon Toyne

`Packed with dark intrigue, danger around every corner, bullets flying, sexual tension, and an endless assault of nasty villains . . . everything a thriller should be and more' Joe Moore

Scott Mariani is the author of the worldwide-acclaimed action-adventure thriller series featuring ex-SAS hero Ben Hope. Scott's novels have topped the bestseller charts in his native Britain and are translated into over twenty languages worldwide. To date the Ben Hope series comprises the #1 Bestseller The Alchemist's Secret, The Mozart Conspiracy, The Doomsday Prophecy (published in the USA as The Hope Vendetta), The Heretic's Treasure, The Shadow Project, The Lost Relic, The Sacred Sword and the forthcoming The Armada Legacy (May 2013). Scott is also the author of the bestselling Kindle eBook novella, Passenger 13. Scott's novels have been described as `James Bond meets Jason Bourne with a historical twist'.

GOR003407909
The Doomsday Prophecy (Ben Hope, Book 3) by Scott Mariani
Scott Mariani
Ben Hope
Used - Very Good
Paperback
HarperCollins Publishers
2011-07-21
482
1847563422
9781847563422
N/A
Book picture is for illustrative purposes only, actual binding, cover or edition may vary.
This is a used book - there is no escaping the fact it has been read by someone else and it will show signs of wear and previous use. Overall we expect it to be in very good condition, but if you are not entirely satisfied please get in touch with us.