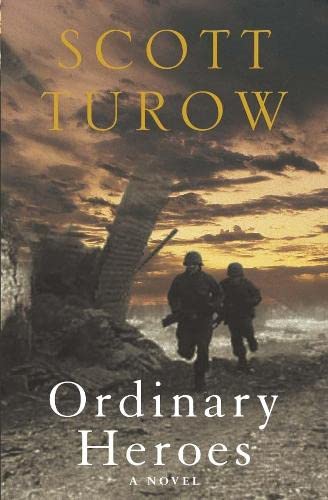 All parents keep secrets from their children. My father, it seemed, kept more than most . . .

Whilst mourning the death of his father, journalist Stewart Dubin decides to research the life of a man he had always respected, always admired, but possibly never quite knew . . .

As a young, idealistic lawyer during the last terrible months of the Second World War, David Dubin was sent to the European Front - ostensibly to bring charges against a brave American hero, Robert Martin, who had suddenly, inexplicably, gone local and stopped following orders. Martin has become a liability and the authorities want him neutralized.

But as Dubin learns more about Martin and the demons possessing him, he finds himself falling in love with Martin's enigmatic ex-mistress - a dangerous woman of incredible courage. And someone who will do anything to protect her comrade-in-arms . . .

Stewart discovers a journal written by his father - and learns of his incredible courage in the face of battle, reads first-hand of the shattering moral consequences for those caught in the chaos of war and, finally, the secret he had died protecting . . .

Praise for Scott Turow: "No one writes better mystery suspense novels than Scott Turow." -"Los Angeles Times "Scott Turow not only knows what his readers want, he delivers just about perfectly . . . Turow is the closest we have to a Balzac of the fin de siecle professional class." -Todd Gitlin, "Chicago Tribune "[Turow has] set new standards for the genre, most notably in the depth and subtlety of his characterizations . . . the kind of reading pleasure that only the best novelists-genre or otherwise-can provide."-Gary Krist, "The New York Times "Of all the lawyer-storytellers who have clambered onto the bestseller lists in recent years, Scott Turow is the champ. Not only are his plots absorbing and his characters persuasive, but his sentences flow with an artful cadence."-Dennis Drabelle, "The Washington Post Book World

Scott Turow is the world-famous author of several bestselling novels about the law, from Presumed Innocent to Reversible Errors , as well as the wartime thriller Ordinary Heroes. He has also written an examination of the death penalty, Ultimate Punishment. He lives with his family outside Chicago, where he is a partner in the international law firm of Sonnenschein Nath & Rosenthal.

GOR000473295
Ordinary Heroes by Scott Turow
Scott Turow
Used - Very Good
Paperback
Pan Macmillan
2006-08-24
384
0330441337
9780330441339
N/A
Book picture is for illustrative purposes only, actual binding, cover or edition may vary.
This is a used book - there is no escaping the fact it has been read by someone else and it will show signs of wear and previous use. Overall we expect it to be in very good condition, but if you are not entirely satisfied please get in touch with us.