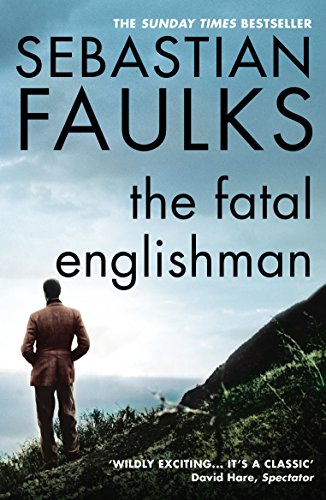 The Fatal Englishman
by Sebastian Faulks

In Stock
£3.59
In the last months of his 29-year life, he fought a ravening opium addiction to succeed in claiming a place in history of English painting. He begged to be allowed to return to flying, and died mysteriously in a night training operation, aged 23.
Like New Very Good Good
Only 1 left

Christopher Wood, a beautiful young Englishman, decided to be the greatest painter the world had seen. He went to Paris in 1921. By day he studied, by night he attended the parties of the beau monde. He knew Picasso, worked for Diaghilev and was a friend of Cocteau. In the last months of his 29-year life, he fought a ravening opium addiction to succeed in claiming a place in history of English painting. Richard Hilary, confident, handsome and unprincipled, flew Spitfires in the Battle of Britain before being shot down and horribly burned. He underwent several operations by the legendary plastic surgeon, A H McIndoe. His account of his experiences, The Last Enemy, made him famous, but not happy. He begged to be allowed to return to flying, and died mysteriously in a night training operation, aged 23. Jeremy Wolfenden was born in 1936, the son of Jack, later Lord Wolfenden. Charming, generous and witty, he was the cleverest Englishman of his generation, but left All Souls to become a hack reporter. At the height of the Cold War, he was sent to Moscow where his louche private life made him the plaything of the intelligence services. A terrifying sequence of events ended in Washington where he died at the age of 31.

"Flawless... Poetic... Superbly portrayed... [Faulks's] feat of imagination...is phenomenal" * Daily Telegraph *
"A mystery story of rare narrative power" * Financial Times *
"Sebastian Faulks is a master at switching on the emotions of the reader... The spare narrative hides a commitment to his subject which pulls you in and leaves you gasping for those lost lives" -- Brian Masters * Mail on Sunday *
"Compelling and stunningly written" * The Times *
"Faulks is a prodigiously talented writer" * New York Times *

Sebastian Faulks was born in April 1953. Before becoming a full-time writer in 1991, he worked as a journalist. Sebastian Faulks's books include A Possible Life, Human Traces, On Green Dolphin Street, Engleby, Birdsong, A Week in December and Where My Heart Used to Beat.

GOR010538938
The Fatal Englishman: Three Short Lives by Sebastian Faulks
Sebastian Faulks
Used - Like New
Paperback
Vintage Publishing
1997-01-30
352
0099518015
9780099518013
N/A
Book picture is for illustrative purposes only, actual binding, cover or edition may vary.
The book has been read, but looks new. The book cover has no visible wear, and the dust jacket is included if applicable. No missing or damaged pages, no tears, possible very minimal creasing, no underlining or highlighting of text, and no writing in the margins.