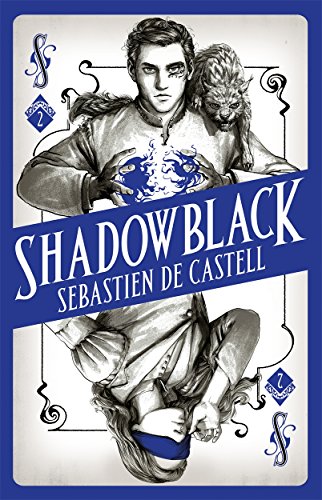 SORCERY IS A SCAM . . . Four months after fleeing his own people, Kellen has discovered he's an even worse outlaw than he was mage. It doesn't help that his only allies are a swaggering card player and a thieving squirrel cat. Then he meets Seneira, a blindfolded girl who isn't blind, and whose secrets get them caught up in a conspiracy of magic, blackmail and murder. Now Kellen must find the mage responsible before the entire frontier falls victim to the mystical plague known as the shadowblack. Perfect for fans of The Dark Tower, Firefly, Guardians of the Galaxy, Terry Pratchett, Ben Aaronovitch and Jim Butcher. *** 'Magic with a Wild West flavour, served with flair.' Financial Times 'A bucket-load of tension is offset with humour, power struggles, lots of magic and some great characters. Fantasy junkies will devour with relish.' The Guardian 'gloriously escapist fantasy' The Observer

I loved the twists towards the end, and Kellen coming to realise a bit more about who he wants to be * Books and Lemon Squash *
Kellen is starting to grow up, to become more confident in his power and in who he is. he is still angry at what has been done to him and at the danger his friends and family are placed in, but we can begin to see him mature into somebody who will be able to do things about that * Blue Black Balloon *
I found Shadowblack to be a fantastic fantasy western hybrid and a rousing adventure. I am definitely looking forward to continuing the story in the next book * The Tattooed Book Geek *
The plot of the series continues to get more complicated and exciting and though I have read two books in this series this year - I already can't wait to find out what happens next. The Spellslinger series is a fun and heartwarming adventure for all ages that teaches you that all you need to be successful is hard work and a little of sleight of hand. * The Quill To Live *
Shadowblack remains good for giggles and is once again highly cinematic. Kellen remains a likeable narrator with a good heart, and both Ferius and Reichis are a delight to spend more time with. And because I like my characters spiky and unexpected in their ethics, Rosie intrigued me more than she was perhaps intended to. There's no such thing as your average Argosi, and that alone may keep me coming back for more * One More *
Shadowblack has a cinematic world, and it's got bags of originality and fun to it. The main characters are memorable, hilarious and relatable. Personally, I relate to Reichis on a deep, spiritual level. Don't know about you guys!? There's action, some Wild West vibes, and plenty of humour and snark provided by certain characters as well as a rich and deep plot to keep you guessing! * Reality's A Bore *
a rip-roaring adventure, with top-notch action, humour, and magic sequences. I can't wait for the third in this series! * Much Ado About Books *
Shadowblack is all about the classic crisis of confidence, not knowing what to do or where you belong, feeling like you're all alone in a big and scary world. Love, love, loved it! This sequel to Spellslinger was worth the wait * Reading Zone *

Sebastien de Castell had just finished a degree in Archaeology when he started work on his first dig. Four hours later he realized how much he actually hated archaeology and left to pursue a very focused career as a musician, ombudsman, interaction designer, fight choreographer, teacher, project manager, actor and product strategist. His only defence against the charge of unbridled dilettantism is that he genuinely likes doing these things and that, in one way or another, each of these fields plays a role in his writing. He sternly resists the accusation of being a Renaissance Man in the hopes that more people will label him that way. Sebastien lives in Vancouver with his lovely wife and two belligerent cats. Follow Sebastien www.decastell.com or on Twitter: @decastell

GOR008800206
Shadowblack: Book Two in the page-turning new fantasy series by Sebastien de Castell
Sebastien de Castell
Spellslinger
Used - Very Good
Hardback
Hot Key Books
2017-10-05
352
1471406679
9781471406676
N/A
Book picture is for illustrative purposes only, actual binding, cover or edition may vary.
This is a used book - there is no escaping the fact it has been read by someone else and it will show signs of wear and previous use. Overall we expect it to be in very good condition, but if you are not entirely satisfied please get in touch with us.