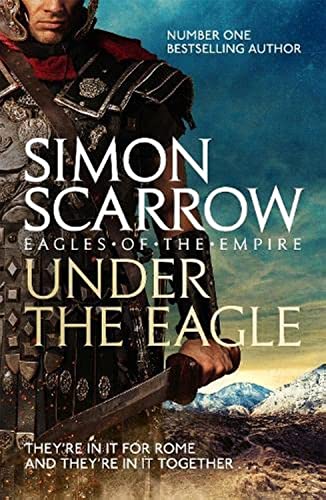 Under the Eagle (Eagles of the Empire 1)
by Simon Scarrow

Under the Eagle (Eagles of the Empire 1) Summary

Under the Eagle (Eagles of the Empire 1) by Simon Scarrow

UNDER THE EAGLE is the gripping first novel in Simon Scarrow's bestselling EAGLES OF THE EMPIRE series. A must read for fans of Bernard Cornwell and Conn Iggulden. Praise for Simon Scarrow's compelling novels: 'Gripping and moving' The Times

AD 42, Germany. Tough, brutal and unforgiving. That's how new recruit Cato is finding life in the Roman Second Legion. He may have contacts in high places, but he could really use a friend amongst his fellow soldiers right now.

Cato has been promoted above his comrades at the order of the Emperor and is deeply resented by the other men. But he quickly earns the respect of his Centurion, Macro, a battle-hardened veteran as rough and ready as Cato is quick-witted and well-educated. They are poles apart, but soon realise they have a lot to learn from one another.

On a campaign to Britannia - a land of utter barbarity - an enduring friendship begins. But as they undertake a special mission to thwart a conspiracy against the Emperor they rapidly find themselves in a desperate fight to survive...

Customer Reviews - Under the Eagle (Eagles of the Empire 1)

Under the Eagle (Eagles of the Empire 1) Reviews

Praise for Simon Scarrow: 'I really don't need this kind of competition... It's a great read' -- Bernard Cornwell
A satisfyingly bloodthirsty, bawdy romp...perfect for Bernard Cornwell addicts who will relish its historical detail and fast-paced action. Storming stuff * Good Book Guide *
Scarrow's [novels] rank with the best * Independent *
Gripping... ferocious and compelling, it is a story of blood, romance and sacrifice * Daily Express *
Rollicking good fun * Mail on Sunday *
[Simon Scarrow] blends together historical facts and characters to create a book that simply cannot be put down... Highly recommended * Historical Novels Review *

GOR001197367
Under the Eagle (Eagles of the Empire 1) by Simon Scarrow
Simon Scarrow
Eagle
Used - Very Good
Paperback
Headline Publishing Group
2008-08-07
448
0755349709
9780755349708
N/A
Book picture is for illustrative purposes only, actual binding, cover or edition may vary.
This is a used book - there is no escaping the fact it has been read by someone else and it will show signs of wear and previous use. Overall we expect it to be in very good condition, but if you are not entirely satisfied please get in touch with us.