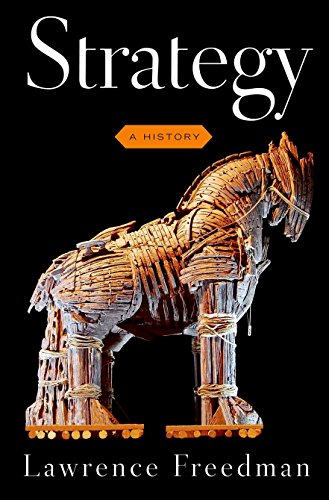 Out of Stock
£12.99
One of the world's leading authorities on war and international politics synthesizes the vast history of strategy's evolution in this consistently engaging and surprising account of how it came to pervade every aspect of life.
Very Good
Only 0 left

In Strategy: A History, Sir Lawrence Freedman, one of the world's leading authorities on war and international politics, captures the vast history of strategic thinking, in a consistently engaging and insightful account of how strategy came to pervade every aspect of our lives. The range of Freedman's narrative is extraordinary, moving from the surprisingly advanced strategy practiced in primate groups, to the opposing strategies of Achilles and Odysseus in The Iliad, the strategic advice of Sun Tzu and Machiavelli, the great military innovations of Baron Henri de Jomini and Carl von Clausewitz, the grounding of revolutionary strategy in class struggles by Marx, the insights into corporate strategy found in Peter Drucker and Alfred Sloan, and the contributions of the leading social scientists working on strategy today. The core issue at the heart of strategy, the author notes, is whether it is possible to manipulate and shape our environment rather than simply become the victim of forces beyond one's control. Time and again, Freedman demonstrates that the inherent unpredictability of this environment-subject to chance events, the efforts of opponents, the missteps of friends-provides strategy with its challenge and its drama. Armies or corporations or nations rarely move from one predictable state of affairs to another, but instead feel their way through a series of states, each one not quite what was anticipated, requiring a reappraisal of the original strategy, including its ultimate objective. Thus the picture of strategy that emerges in this book is one that is fluid and flexible, governed by the starting point, not the end point. A brilliant overview of the most prominent strategic theories in history, from David's use of deception against Goliath, to the modern use of game theory in economics, this masterful volume sums up a lifetime of reflection on strategy.

[Strategy: A History] elegantly synthesises strands of thought. * RUSI Journal *
This is an epic undertaking, of considerable intellectual ambition. It displays the familiar Freedmanian virtues: clarity, economy, proficiency, sagacity a compound of deep immersion, practised exposition, and a certain practical wisdom in it... In strategy, everything is connected. Freedman shows us how. * The Guardian *
To the best of my knowledge, this is the only book ever attempted on the entire historical and conceptual domain of strategy. Indeed, I am somewhat awestruck by the scope of the mission that Freedman set himself. ... Strategy is a very considerable, indeed monumental, product that no one else has had the temerity to attempt. * Colin Gray, International Affairs *
A discursive account with many interesting passages ... There is much of interest in Freedman's book. * Jeremy Black, History Today *
Arguably the best book ever written on strategy (in its widest sense). * Gerard DeGroot, Washington Post *
Freedman offers a wide-ranging, scholarly and entertaining history of the concept. He ranges from David and Goliath to Peter Drucker, by way of Marx and Machiavelli - and emphasises the importance of responding flexibly to events. * Books of the Year, Financial Times *
This is a book of startling scope, erudition and, more than anything, wisdom. * Janan Ganesh, Financial Times *
Magisterial ... wide-ranging erudition and densely packed argument. * The Economist *
[A] fascinating, at moments playful book. * Bruce Anderson, The Sunday Times *
Freedman's writing is admirably lucid, and the breadth of his knowledge and scholarship astonishing...Both as a history of ideas and as a work of reference, it is invaluable Erudite, wise and illuminating, Strategy is a book to be savoured and treasured. * Sir David Goodall, The Tablet *
This is an original and intriguing approach. * Richard Overy, Literary Review *
[A] vast exploration of strategy that is difficult to read, full of surprises, and marked by unsurpassed erudition. It also is witty and reminds us that he in the world who knows most about strategy may be the one who is the most unimpressed with it. * Victor Davis Hanson, National Review *
An ambitious and sprawling book ... With admirable candor, Freedman tells us that he received the contract for this book in (gulp!) 1994, and that he made a "number of false starts" with the manuscript. Considering the daunting scope of the subject, this is entirely understandable. Considering the wisdom and analytical brilliance he brings to bear on that subject, it's been well worth the wait. * The Daily Beast *
Will surely become a standard reference in the discipline ... ambitious and impressive. * strategy+business.com *
A marvelous grand tour of the meaning, implications, and consequences of strategic thinking through the ages and in multiple contexts. Freedman is a master of the subject and unsurpassed in his ability to unravel the twists and turns of strategic complexities and paradoxes. * Robert Jervis, Adlai E. Stevenson Professor of International Politics, Columbia University *
Lawrence Freedman shows here why he is justly renowned as one of the world's leading thinkers about strategy, which he defines as the central art of getting more out of a situation than the starting balance of power would suggest. * Joseph S. Nye, Jr., Harvard University and author of The Future of Power *
Erudite, wide-ranging, and covering an astonishing array of subjects relating to strategy. * Azar Gat, author of War in Human Civilization *
Freedman's writing is admirably lucid, and the breadth of his knowledge and scholarship astonishing... Both as a history of ideas and as a work of reference, it is invaluable Erudite, wise and illuminating, Strategy is a book to be savoured and treasured, not least in its conclusion: that "in the end, all we can do is to act as if we can influence events. To do otherwise is to succumb to fatalism." * The Tablet *
So erudite, so wide-ranging, and so knowledgeable ... impressive achievement. No single book on strategy is as intellectually intimidating; and none moves as easily as his does across time and space. * The World Today *
Immensely learned and wide-ranging, beautifully written and full of insight ... a fine book. * Michael Williams, University of Hertfordshire *

Lawrence Freedman has been Professor of War Studies at King's College London since 1982, and Vice-Principal since 2003. Elected a Fellow of the British Academy in 1995 and awarded the CBE in 1996, he was appointed Official Historian of the Falklands Campaign in 1997. He was awarded the KCMG in 2003. In June 2009 he was appointed to serve as a member of the official inquiry into Britain and the 2003 Iraq War. Professor Freedman has written extensively on nuclear strategy and the cold war, as well as commentating regularly on contemporary security issues. His most recent book, A Choice of Enemies: America Confronts the Middle East, won the 2009 Lionel Gelber Prize and Duke of Westminster Medal for Military Literature.

DEDICATION ; PREFACE ; Part I ORIGINS ; 1 ORIGINS 1: EVOLUTION ; 2 ORIGINS 2: THE BIBLE ; 3 ORIGINS 3: THE GREEKS ; 4 SUN TZU AND MACHIAVELLI ; 5 SATAN'S STRATEGY ; Part II STRATEGIES OF FORCE ; 6 THE NEW SCIENCE OF STRATEGY ; 7 CLAUSEWITZ ; 8 THE FALSE SCIENCE ; 9 ANNIHILATION OR EXHAUSTION ; 10 BRAIN AND BRAWN ; 11 THE INDIRECT APPROACH ; 12 NUCLEAR GAMES ; 13 THE RATIONALITY OF IRRATIONALITY ; 14 GUERRILLA WARFARE ; 15 OBSERVATION AND ORIENTATION ; 16 THE REVOLUTION IN MILITARY AFFAIRS ; 17 THE MYTH OF THE MASTER STRATEGIST ; PART III STRATEGY FROM BELOW ; 18 MARX AND A STRATEGY FOR THE WORKING CLASS ; 19 HERZEN AND BAKUNIN ; 20 REVISIONISTS AND VANGUARDS ; 21 BUREAUCRATS, DEMOCRATS, and ELITES ; 22 FORMULAS, MYTHS, AND PROPAGANDA ; 23 THE POWER OF NONVIOLENCE ; 24 EXISTENTIAL STRATEGY ; 25 BLACK POWER AND WHITE ANGER ; 26 FRAMES, PARADIGMS, DISCOURSES, AND NARRATIVES ; 27 RACE, RELIGION, AND ELECTIONS ; PART IV STRATEGY FROM ABOVE ; 28 THE RISE OF THE MANAGEMENT CLASS ; 29 THE BUSINESS OF BUSINESS ; 30 MANAGEMENT STRATEGY ; 31 BUSINESS AS WAR ; 32 THE RISE OF ECONOMICS ; 33 RED QUEENS AND BLUE OCEANS ; 34 THE SOCIOLOGICAL CHALLENGE ; 35 DELIBERATE OR EMERGENT ; PART V theories of strategy ; 36 THE LIMITS OF RATIONAL CHOICE ; 37 BEYOND RATIONAL CHOICE ; 38 STORIES AND SCRIPTS ; 37 BEYOND RATIONAL CHOICE ; 38 STORIES AND SCRIPTS ; ACKNOWLEDGMENTS