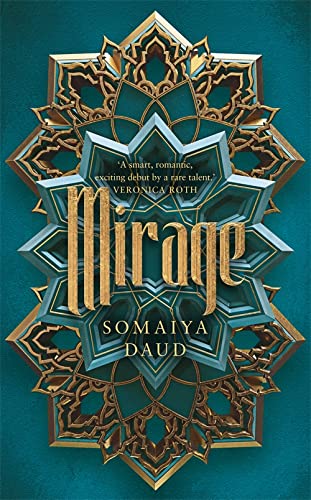 Used Price
£8.79
New RRP £14.99
Free Shipping in the UK
A stunning and lushly imagined young adult debut about a girl who is kidnapped and forced to become the body double for the princess of a ruthless empire. Perfect for fans of An Ember in the Ashes and Cinder.
Reviews:
Trustpilot
Very Good Well Read

The crown of Dihya had been stripped from me, my face changed, my body broken.
But I was not a slave and I was not a spare.
I was my mother's daughter, and I would survive and endure. I would find my way back home.

'Prepare yourself for a story that's enriching, thrilling, and captivating' - BuzzFeed

'By turns thrilling and ruminative, sexy and heartbreaking' - Sabaa Tahir, author of an Ember in the Ashes

In a star system dominated by the brutal Vathek empire, eighteen-year-old Amani is a dreamer. She dreams of what life was like before the occupation and receiving a sign that one day, she, too, will have adventures, and travel beyond her isolated moon.

But when adventure comes for Amani, it is not what she expects. She is kidnapped by the government and taken in secret to the royal palace. There, she discovers that she is nearly identical to the cruel half-Vathek Princess Maram. The princess is so hated by her conquered people that she requires a body double to appear in public, ready to die in her place.

As Amani is forced into her new role, she can't help but enjoy the palace's beauty - and her time with the princess' fiance, Idris. But the glitter of the royal court belies a world of violence and fear, and she soon realises that one wrong move could lead to her death...

A BuzzFeed, Publishers Weekly, Bustle, and Hypable most anticipated book of 2018
Mirage is full of characters who feel like they existed long before the story began, and a rich world that is as beautiful as it is cruel. A smart, romantic, exciting debut from a rare talent -- Veronica Roth, #1 New York Times bestselling author of Divergent
Prepare yourself for a story that's enriching, thrilling, and captivating * BuzzFeed *
Mirage is by turns thrilling and ruminative, sexy and heartbreaking. Somaiya Daud has written a moving and unforgettable debut * Sabaa Tahir, author of An Ember in the Ashes *
Superb . . . a beautiful and necessary meditation on finding strength in one's culture * Entertainment Weekly *
Lush and dangerous, Mirage had me entranced. Amani's journey-from rural innocent to calculating young woman, from village girl to royal impersonator-is galactic. I was here for all of it, and I desperately need to know what happens next. -- Tochi Onyebuchi, author of Beasts Made of Night
Riveting . . . Readers who love clever, independent young women, protagonists of colour, cultures we don't normally get to see positively represented in fiction, lite-SF, space opera, royal court intrigue, and delectable insta-love will inhale Mirage * Tor.com *
A masterful, stunning read that brings Somaiya onto the scene as a major talent and voice and force to be reckoned with. -- Margaret Stohl, #1 New York Times bestselling author of Beautiful Creatures and Black Widow: Forever Red
Beautifully detailed, with enchanting poetry and characters you'll come to care for, Mirage is an exciting introduction to what is sure to be a thrilling series * CultureFly *
Mirage is smart, sexy, and devilishly clever. Somaiya Daud has penned a tale worthy of all the stars in the sky -- Renee Ahdieh, author of Flame in the Mist
Mirage is a fantastic book. It's full of my favourite things: secrets, intrigue, gorgeous mythology, and complicated characters. It will break your heart and fill you with hope -- Kat Howard, author of An Unkindness of Magicians
Daud is a masterful storyteller. Mirage gives readers an exquisitely wrought world with deft characters, death-defying stakes, and an aching romance. Bound to linger in your dreams. -- Roshani Choksi, New York Times bestselling author of The Star-Touched Queen
Mirage had me enthralled from its first page to its last. It's a a heart-wrenching, romantic, and exhilarating page-turner. Somaiya Daud is a brilliant writer and she has written a brilliant book. -- Courtney Summers, author of All the Rage

Somaiya Daud was born in a Midwestern city, and spent a large part of her childhood and adolescence moving around. Like most writers, she started when she was young and never really stopped. Her love of all things books propelled her to get a degree in English literature (specializing in the medieval and early modern), and while she worked on her Master's degree she doubled as a bookseller at Politics and Prose in their children's department. Determined to remain in school for as long as possible, she packed her bags in 2014 and moved to the west coast to pursue a doctoral degree in English literature. Now she's writing a dissertation on Victorians, rocks, race, and the environment.

GOR009257219
Mirage: the captivating Sunday Times bestseller by Somaiya Daud
Somaiya Daud
Mirage
Used - Very Good
Hardback
Hodder & Stoughton
2018-08-28
320
1473672627
9781473672628
N/A
Book picture is for illustrative purposes only, actual binding, cover or edition may vary.
The book has been read, but looks new. The book cover has no visible wear, and the dust jacket is included if applicable. No missing or damaged pages, no tears, possible very minimal creasing, no underlining or highlighting of text, and no writing in the margins.