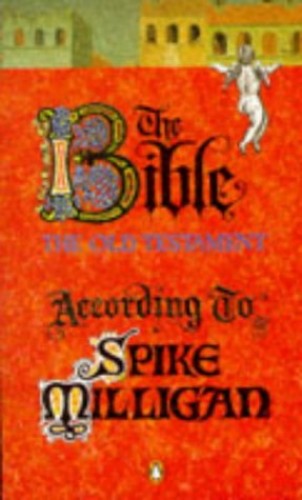 In Stock
£3.99
In the Bible, according to author: "In the beginning God created the Heaven and Earth and darkness was upon the face of the deep; this was due to a malfunction at Lots Road Power Station... And God said 'Let there be light'." This title presents the author's version of the best known biblical stories.
Very Good
10 in stock

The Bible According to Spike Milligan Summary

The Bible According to Spike Milligan is an irreverent but very funny spoof of The Old Testament in which, in his own inimitable fashion, Spike Milligan gives his version of the best known biblical stories.

In the Bible, according to Spike Milligan: "In the beginning God created the Heaven and Earth and darkness was upon the face of the deep; this was due to a malfunction at Lots Road Power Station...And God said 'Let there be light'."

'Milligan is the Great God to all of us' John Cleese

Spike Milligan was born at Ahmednagar in India in 1918. He received his first education in a tent in the Hyderabad Sindh desert and graduated from there, through a series of Roman Catholic schools in India and England, to the Lewisham Polytechnic.

He then plunged into the world of Show Business, seduced by his first stage appearance, at the age of eight, in the nativity play of his Poona convent school. He began his career as a band musician, but has since become famous as a humorous scriptwriter and actor in both films and broadcasting. Spike received an honorary CBE in 1992.

GOR000443356
The Bible According to Spike Milligan by Spike Milligan
Spike Milligan
Used - Very Good
Paperback
Penguin Books Ltd
1994-07-28
192
0140239707
9780140239706
N/A
Book picture is for illustrative purposes only, actual binding, cover or edition may vary.
This is a used book - there is no escaping the fact it has been read by someone else and it will show signs of wear and previous use. Overall we expect it to be in very good condition, but if you are not entirely satisfied please get in touch with us.