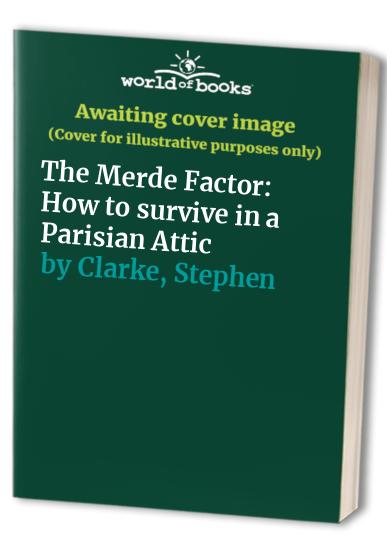 The Merde Factor
by Stephen Clarke

In Stock
£5.99
Englishman Paul West is living the Parisian dream, and doing his best not to annoy the French.Threatened with eviction, unemployment and bankrupcy, Paul realises that his personal merde factor is about to hit the fan...
Very Good Well Read
5 in stock

Englishman Paul West is living the Parisian dream, and doing his best not to annoy the French. But recently things have been going tres wrong: He's stuck in an apartment so small that he has to cut his baguettes in two to fit them in the kitchen. His research into authentic French cuisine is about to cause a national strike - and it could be all his fault. His Parisian business partner is determined to close their tea-room. And thinks that sexually harrassing his female employees is a basic human right. And Paul's gorgeous ex-girlfriend seems to be stalking him. Threatened with eviction, unemployment and bankrupcy, Paul realises that his personal merde factor is about to hit the fan...

"Has done more for the Entente Cordiale than any of our politicians." * Daily Mail *
"Edgier than Bryson, hits harder than Mayle." * The Times *
"Must-have comedy-of-errors diary of being a Brit abroad." * Mirror *

Stephen Clarke lives in Paris, where he divides his time between writing and not writing. His Merde novels have been bestsellers all over the world, including France. His non-fiction books include Talk to the Snail, an insider's guide to understanding the French; How the French Won Waterloo (or Think They Did), an amused look at France's continuing obsession with Napoleon; Dirty Bertie: An English King Made in France, a biography of Edward VII; and 1000 Years of Annoying the French, which was a number one bestseller in Britain. Research for The French Revolution and What Went Wrong took him deep into French archives in search of the actual words, thoughts and deeds of the revolutionaries and royalists of 1789. He has now re-emerged to ask modern Parisians why they have forgotten some of the true democratic heroes of the period, and opted to idolize certain maniacs. Follow Stephen on @SClarkeWriter and www.stephenclarkewriter.com

GOR004671434
The Merde Factor: (Paul West 5) by Stephen Clarke
Stephen Clarke
Used - Very Good
Paperback
Cornerstone
2013-03-28
384
0099574292
9780099574293
N/A
Book picture is for illustrative purposes only, actual binding, cover or edition may vary.
This is a used book - there is no escaping the fact it has been read by someone else and it will show signs of wear and previous use. Overall we expect it to be in very good condition, but if you are not entirely satisfied please get in touch with us.